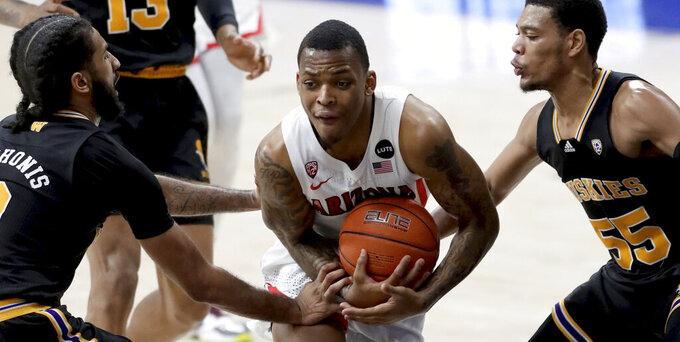 TUCSON, Ariz. (AP) — James Akinjo was 4 when his mother died of leukemia. He was 13 when his brother died. He's known of friends getting murdered, seen family members go to prison, dodged gang violence while growing up.

Akinjo easily could have ended up on the wrong path, spiraled downward from the pain, been caught up in the maelstrom of life on the tough streets of Oakland, California.

Akinjo never wavered in his quest to become the best possible basketball player he could. If there was even a hint that he might be steering in the wrong direction, his family and friends were there to nudge him back.

"My family steered me right, kept me on the right track," the Arizona junior guard said. “Everybody from my neighborhood supported me, made sure I did the right things.”

Akinjo has made a name for himself as one of college basketball's toughest guards, first at Georgetown, now at Arizona.

Early adversity in his life forced him to form some of that toughness. So did playing basketball — doing anything, for that matter — in Oakland.

It's turned him into a leader and, potentially, a future NBA player.

“Things happen in life, some people have it harder than others, and James would be a perfect example of that,” Arizona assistant coach Danny Peters said. “He feels the pain from those experiences, but has still pushed through them to accomplish things. He remains committed to what he wants to do, academically and athletically."

Those around Akinjo have helped him keep focused on his goals.

Akinjo was raised by his grandmother, Roberta Stevenson, and has a support group that includes his father, uncle and aunt. They've always been encouraging, yet also don't mince words about what's right and wrong for him.

The neighborhood formed a sort of protective shield around him, keeping him away from the danger, pushing him to excel and stay focused on his goals.

Akinjo even got some help from Portland Trail Blazers star Damian Lillard, another tough-as-nails guard from Oakland.

Lillard reached out to Akinjo a few years back and the two have stayed in touch, giving the Arizona guard a sounding board if he ever wants to reach out about basketball — or anything.

“He was always there for me,” Akinjo said. “If I ever need anything, I can call him. He helped me with basketball things, but also with dealing with life at this point.”

Akinjo originally committed to Connecticut but ended up at Georgetown after Kevin Ollie was fired in 2018. The 6-foot-1 guard thrived with the Hoyas, earning Big East freshman of the year honors after averaging 13.4 points and 5.2 assists per game during the 2018-19 season.

When he felt Georgetown was no longer a good fit, Akinjo decided to move back out west to play for Sean Miller at Arizona.

It worked out well for both sides.

Akinjo had to sit out last season due to NCAA transfer rules and was expected to have a big impact this season after the Wildcats lost three players to the NBA draft.

Akinjo had 19 points in his first game with Arizona and eclipsed 20 points seven times, including a 26-point outing against Washington on Feb. 27. He led the Wildcats at 15.6 points and 5.4 assists per game. His 53 3-pointers and 37 steals were team highs.

“He is definitely an all-conference player,” Miller said. “I don’t think I have to even campaign for him, because my peers, the coaches in this league, when they start with Arizona, they start with him. He’s our heart and soul and he’s had a fantastic season, he really has.”

Akinjo's support system and his own determination made it possible.