Scheyer hopes No. 7 Duke's defense ready for No. 6 Kansas 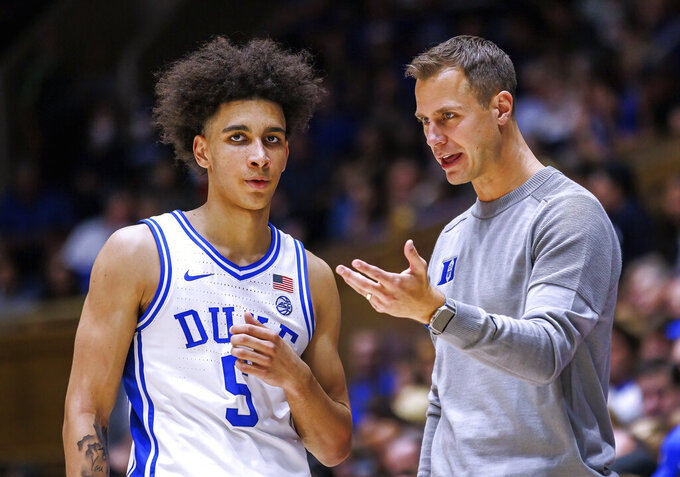 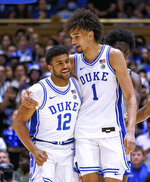 Jon Scheyer pushed defense from the first workouts after taking over at Duke. A week after his debut, he'll get a look at how that unit performs against a top opponent.

The seventh-ranked Blue Devils face sixth-ranked and reigning national champion Kansas on Tuesday night in Indianapolis for the Champions Classic, a fixture of college basketball’s early season schedule for more than a decade.

That game is one of seven matchups this week with both teams ranked in the first regular-season AP Top 25 poll. It also marks the first marquee game for the 35-year-old Scheyer in charge of the program where he won a national championship as a player and as an assistant coach – and now works in the spotlight as the successor to retired Hall of Famer Mike Krzyzewski.

Duke (2-0) held Jacksonville and USC Upstate to a combined 82 points on 30.8% shooting, including 21.7% from 3-point range. The Blue Devils got a boost in the second game as 7-foot-1 Dereck Lively II – the nation’s No. 1 recruit – made his debut after a preseason injury to bring mobility and rim protection.

“They’ve embraced the commitment on the defensive end,” Scheyer said. “I still think we have a long way to go. But you have to take it step by step. … They want to get better at it. That’s been the fun thing.

"I think if you saw us July 1 to right now, it’s been a big improvement. Hopefully you say the same thing from where we are now versus a month or two from here.”

Acting Kansas coach Norm Roberts, who is leading the Jayhawks during Bill Self’s four-game suspension, said it’s difficult to tell just yet about how much Scheyer will use straight from his time under Krzyzewski and how much he’s adjusting Duke’s approach.

“I don’t know if you can tell that so early in the year,” Roberts said, adding: “I’m sure when you’re following a Hall of Fame coach, someone that’s done it so well for so long, you’re going to take a lot of things that person did.”

The Bulldogs beat Michigan State last week on an aircraft carrier, and this week will have two games against highly ranked opponents. The first comes Wednesday with a trip to No. 11 Texas, followed by a date with No. 4 Kentucky in its home city of Spokane, Washington — though not in its home arena.

The Continental Tire Main Event in Las Vegas pulled in four ranked teams for this week's two-day tournament. The first round pairs Baylor against No. 16 Virginia while No. 8 UCLA meets No. 19 Illinois on Friday.

The championship and consolation games are Sunday.

Top-ranked North Carolina, which earned 44 off 63 first-place votes in Monday's latest poll to remain on top, gets two home games this week against unranked opponents before a long stretch away from Chapel Hill.

The Tar Heels host Gardner-Webb on Tuesday then James Madison on Sunday. From there, they head west for the Phil Knight Invitational in Portland for the Thanksgiving week, then visit No. 12 Indiana in the ACC/Big Ten Challenge (Nov. 30) followed by Virginia Tech (Dec. 4) to open Atlantic Coast Conference play.

Two Big Ten teams are on deck for next week's AP Top 25.

Michigan State, the leading vote-getter among unranked teams, will have a pair of big-name opponents this week by facing Kentucky in Tuesday's other Champions Classic game. The Spartans also host Villanova — which fell out of the poll from No. 16 after a Week 1 loss to Temple under new coach Kyle Neptune — on Friday.

Purdue was next up among unranked teams and has a matchup with Marquette at home Tuesday.