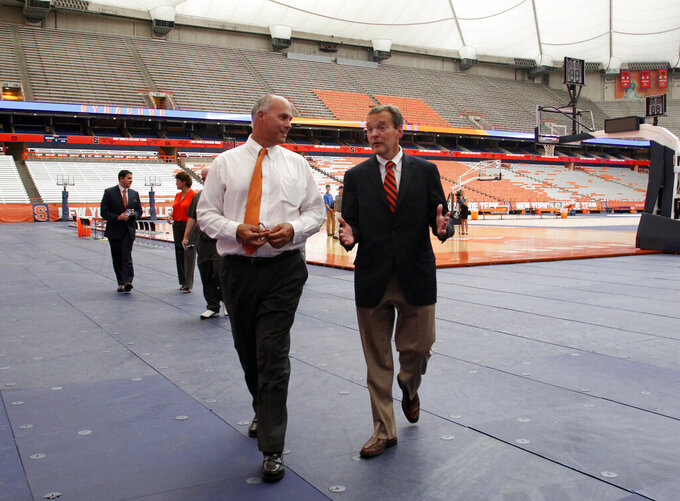 FILE - In this July 12, 2016, file photo, Syracuse University athletic director John Wildhack, right, talks with Syracuse University vice president and chief facilities officer Peter Sala, left, during a visit to the Carrier Dome in Syracuse, N.Y. Sala remembers the moment as if were yesterday, always will. It was the late 1970s, he was a high school student, and Syracuse University had decided to replace aging Archbold Stadium with an indoor facility featuring an air-supported roof. Sala's dad, John, was director of the university's physical plant, and brought some of the drawings of the future Carrier Dome home. (AP Photo/Nick Lisi, File)

Pete Sala remembers when the Dome was just an idea on paper.

It was the late 1970s, he was in high school, and the university had decided to replace aging Archbold Stadium with an indoor facility on the same spot featuring an air-supported roof. Sala's dad, John, was director of the university's physical plant, and brought home some of the drawings of the new building.

“I remember conversations at the kitchen table, my dad saying Jim (Boeheim, the basketball coach) was going kicking and screaming," said Sala, now in charge of the Dome as vice president and chief campus facilities officer. “We had to drag Jim down here, and now look at this place. Who would have imagined that?"

Certainly not Boeheim, who had just become the coach in 1976 and was enjoying great success inside raucous Manley Field House, which seated just under 10,000.

“I remember. I was very skeptical,” Boeheim said. “I had a meeting with (vice chancellor) Cliff Winters. He ran the university. We were winning some 50 games in a row (at home), and I said, ‘Well, I really like where we are.’ And he explained to me, ‘We have this building and we can’t just play six football games in there. We can’t afford it. We’re going to be playing (basketball) in the Dome.’ I said, ‘OK.’ That was the end of that conversation.”

The Teflon-topped structure cost $26.85 million and was named after the Carrier Corporation, which paid $2.75 million for the naming rights in perpetuity, a financial mistake the school is trying to rectify. The first football game in the Carrier Dome was Sept. 20, 1980, and the place was an instant hit. The Orange beat Miami of Ohio 36-24 before 50,564 fans, still the attendance record.

Four decades later, the Dome has a just-completed new roof that’s not supported by air, part of a renovation pegged at $118 million. The project required 4,000 tons of steel and just under 3 acres of fabric for the new roof (the old roof was 6.5 acres), which is designed to hold 7,700 tons of snow.

Also included are a center-hung scoreboard that’s more than 62 feet wide and nearly 20 feet high with four equal sides. The lighting and sound have been enhanced.

The irony of having the Dome named after a company renowned for its air-conditioning products and not having that luxury inside for four decades finally will become an old joke. Air conditioning is part of the renovation.

From early rock concerts featuring U2 and Pink Floyd in a span of days — "I think we rolled well over 100 tractor trailers through the building those two weekends. It was insane,” Sala recalled — the Dome's impact has been significant. More than 16 million people have attended basketball games.

Since the building opened, the Orange under Boeheim have ranked first or second nationally in attendance in all but five seasons. The formation of the Big East Conference in 1979 and the arrival of the top basketball recruit in the country, Pearl Washington, four years later spurred the success at the gate.

“We thought if we could get 15,000 people in there, it would be great," Boeheim said. "When Pearl came, we went right to 25,000. Nobody saw that coming. Nobody could ever have envisioned that, that we could average over 20,000 people a game for what, now, 30 years, with (little) parking. Our fans are second to none just because of what they have to do to get to the game.”

The first event in the renovated building is a home football game on Saturday against Georgia Tech on national TV. For Sala, whose crews over the years have kept the building in remarkable condition despite harsh upstate New York winters, it will be a bittersweet moment with no fans because of the coronavirus pandemic.

“Yeah, it bothers me a little bit," he said. “But we are going to simulate a game atmosphere. I think it’ll allow us to really showcase the place the way we should when we finally do open the doors, which I’m happy about.

“The thing that resonates in my mind is the footprint of the Carrier Dome actually takes up 20,000 less square feet and holds twice as many people as Archbold. That’s kind of a neat fact. It was kind of shoehorned into that location and look what it brought to the community.”