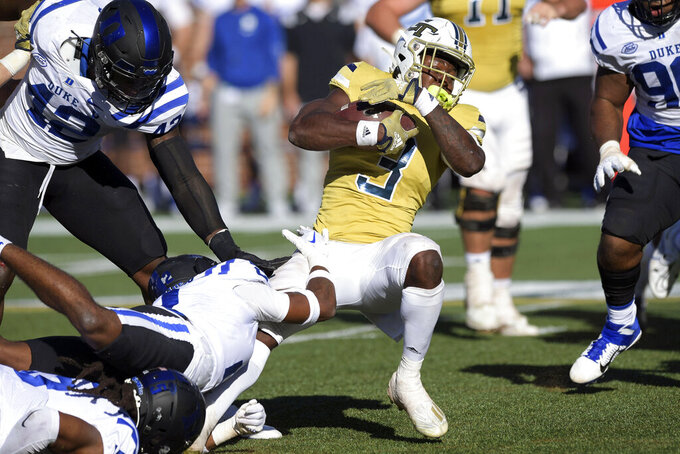 Georgia Tech running back Hassan Hall (3) carries the ball for a gain of 7-yards during the first half of an NCAA college football game against Duke, Saturday, Oct. 8, 2022, at Bobby Dodd Stadium, in Atlanta. (Daniel Varnado/Atlanta Journal-Constitution via AP)

ATLANTA (AP) — Georgia Tech hired Alabama administrator J Batt as its athletic director Friday, putting him in charge of the search for a new football coach.

Batt replaces Todd Stansbury, who was fired Sept. 26 along with football coach Geoff Collins after the Yellow Jackets started the season 1-3.

Collins finished with an overall record of 10-28, the worst winning percentage (.263) of any full-time coach in Georgia Tech history. His lack of success also took down Stansbury, who hired Collins after the 2018 season and steadfastly stood by him even as fans and big-money boosters increasingly expressed their discontent.

“I look forward to working with our student-athletes, coaches, staff, supporters, and fans to reach new heights, on and off the field, and to build on the rich tradition and history of this storied athletics department,” the 40-year-old said in a statement.

Batt has been at Alabama since 2017, overseeing revenues through donations, ticketing and other sources. He guided the launch of a 10-year, $600 million fundraising campaign to benefit Crimson Tide athletics. In addition, Batt was the chief administrator overseeing men’s basketball.

Georgia Tech set a timeline to hire a new athletic director as quickly as possible, then put that person in charge of the search for a new football coach.

Neville had said he wanted an AD in place at least for the latter part of the football season, to allow time to fully evaluate the program and determine what will be needed to turn things around.

Since taking over as interim coach, Brent Key has guided the Yellow Jackets (3-3) to two straight victories — including an unexpected one at Pittsburgh — providing some hope of qualifying for a bowl for the first time since 2018.

Key, who was Collins' assistant head coach, will be the interim at least through the end of the season. He has made it clear he would like to be considered for the full-time job.

Cabrera said Batt was his top choice for AD after a speedy search to find Stansbury's replacement.

“His leadership experience at one of the most competitive programs in the nation and his extraordinary track record in fundraising and revenue generation will bring great value to Georgia Tech,” Cabrera said.

In addition to deciding on a football coach, Batt's top priority will be increasing revenues at a school that has faced tight budgets, fundraising struggles and attendance woes. Collins' buyout of more than $11 million only compounds those issues.

He will face a far tougher challenge at Georgia Tech than he did in Tuscaloosa, where the football program has been a perennial championship contender for more than a decade under coach Nick Saban.

Byrne said Georgia Tech has landed an AD who can turn things around.

“He has incredible vision and has done an outstanding job overseeing many areas of the department," Byrne said. “J has been involved in all of our major decisions and has provided constructive insight and feedback to make us better.”

Batt previously served as senior associate athletic director at East Carolina (2013-17) and as associate AD at Maryland (2011-13). He graduated from North Carolina, a member of the Atlantic Coast Conference. He played on the Tar Heels’ national championship soccer team in 2001.