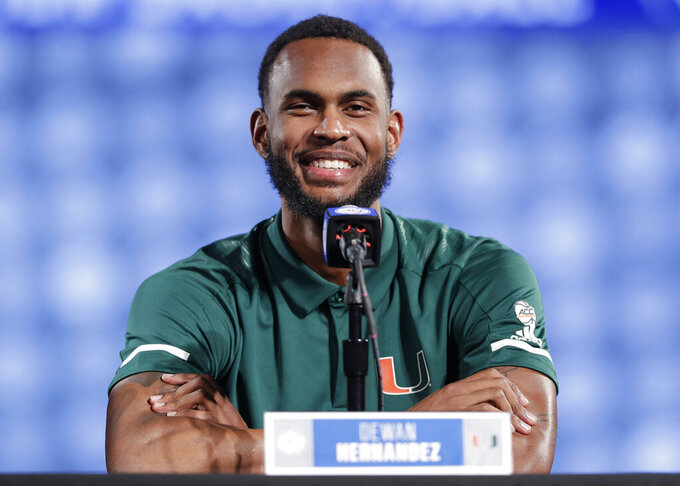 FILE - In this Oct. 24, 2018, file photo, Miami's Dewan Hernandez speaks to the media during a news conference at the Atlantic Coast Conference NCAA college basketball media day in Charlotte, N.C. Miami Hurricanes coach Jim Larranaga says junior forward Dewan Hernandez deserves to be declared eligible by the NCAA because he unwittingly became entangled in a college basketball corruption case when he was duped by an AAU coach. Larranaga spoke at length about Hernandez’s status for the first time Friday, Jan. 18, 2019, as the school awaited an NCAA ruling. (AP Photo/Chuck Burton)

CORAL GABLES, Fla. (AP) — Miami Hurricanes coach Jim Larranaga says junior forward Dewan Hernandez deserves to be declared eligible by the NCAA because he unwittingly became entangled in a college basketball corruption case when he was duped by an AAU coach.

Hernandez has sat out the first 16 games of the season awaiting a ruling on his eligibility, which could come before Miami's game Saturday against No. 13 North Carolina .

"He has made a lot of sacrifices," said Larranaga, who spoke at length about the case for the first time Friday. "He deserves to be back playing."

Last year, a federal jury in New York found three men guilty of fraud charges for channeling secret payment to the families of top-tier recruits to influence their choices of schools, apparel companies and agents. Hernandez was among more than a dozen players listed in a business plan to pay prospective NBA players.

"He got duped by his AAU coach," Larranaga said.

The coach, Jordan Fair, was also an assistant at Louisville before being fired after the scandal broke in 2017.

"Jordan Fair is the one who created this problem," Larranaga said. "A competitor of ours was talking to one of our players. From what I understand that's inappropriate — talking to players who played for another college."

Hernandez, a Miami native who changed his name last offseason from Dewan Huell, was highly recruited before joining the Hurricanes in 2016. He considered turning pro last spring but decided to return to Miami for another season.

Larranaga said Hernandez remains on schedule to graduate with his class. He has continued to practice with both the scout team and starters, sits on the bench at home games and made his own way to Tallahassee for the Hurricanes' game at Florida State.

Hernandez also has wondered publicly about the fairness of his status in limbo.

"I do not understand why other individuals that were implicated continue to compete, while I am being punished," he tweeted Monday. "Why me? No worries though, God has the last say so (hashtag)freedewan."

Former Louisville and South Carolina player Brian Bowen II also denied wrongdoing in the scandal but never played a game in college and began a professional career in Australia.