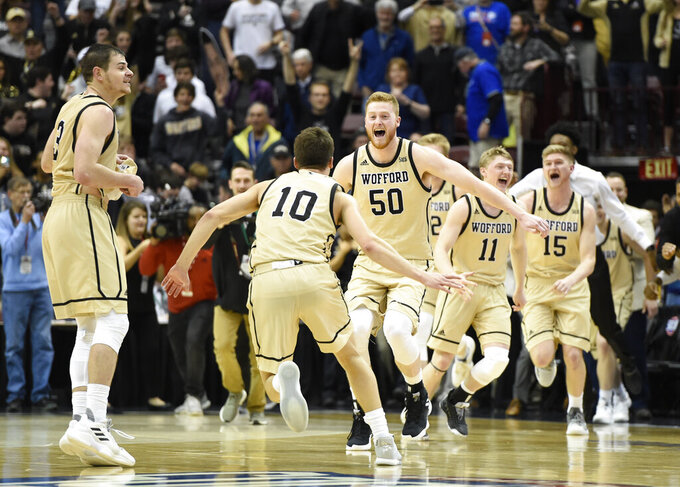 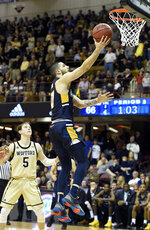 Wofford made plenty of NCAA Tournament at-large candidates nervous before doing them all a favor.

The 20th-ranked Terriers trailed most of the way before closing with a 20-3 run to outlast UNC Greensboro 70-58 on Monday night in the Southern Conference Tournament championship game at Asheville, North Carolina.

Wofford has won 20 consecutive games and entered Monday 14th in the NET rankings , which have replaced the RPI as a factor in NCAA Tournament selection. So the Terriers almost certainly had done enough to warrant an NCAA Tournament bid even if they'd lost Monday.

But a UNC Greensboro victory likely would have given the Southern Conference multiple bids and reduced the number of available at-large invitations for potential bubble teams such as Indiana, Belmont and North Carolina State.

Of course, there's still the possibility the Southern Conference could get more than one school in the 68-team field anyway.

UNC Greensboro (28-6) is hoping it can take a spot from one of those other bubble teams. The Spartans, who entered Monday 57th in the NET rankings, can make a pretty strong argument.

They won a Southern Conference semifinal with Furman, which owns a 25-7 record and was ranked in the Associated Press Top 25 earlier this season. They led Wofford for more than 33 minutes before fading down the stretch.

History suggests that might not be enough. The Southern Conference never has received an NCAA Tournament at-large invitation.

Here's a look at the rising and falling fortunes of some other bubble teams.

Clemson: The Tigers (19-12) strengthened their credentials by ending the regular season Saturday with a 67-55 victory over Syracuse. Clemson finished 9-9 in Atlantic Coast Conference competition to tie North Carolina State for eighth place in the league standings. Those two teams will meet Wednesday in an ACC Tournament matchup of bubble teams.

Georgetown: The Hoyas still have plenty of work to do but helped their cause Saturday by winning 86-84 at No. 23 Marquette, which was ranked 16th at the time of the game. Georgetown (19-12) has won three of its last four games but must fare well in the Big East Tournament to have any realistic chance of making the field.

Indiana: The Hoosiers (17-14) went 8-12 in Big Ten competition but ended the regular season with four straight victories, including an 89-73 rout of Rutgers on Sunday. Indiana still has work to do and has a Big Ten Tournament game on Thursday against Ohio State, another team on the bubble.

Mississippi: A three-game skid had Ole Miss (20-11) sliding into bubble territory, but the Rebels likely secured an NCAA bid Saturday by rallying to win 73-68 at Missouri.

Saint Mary's: The Gaels (21-11) kept their at-large hopes alive by defeating San Diego 69-62 in a West Coast Conference semifinal late Monday night. That still might not be enough. Saint Mary's entered Monday night's game 37th in the NET rankings, but most bracket projections have suggested the Gaels will need to upset No. 1 Gonzaga in the WCC championship game Tuesday to reach the NCAA Tournament.

Florida: The Gators (17-14) followed up a five-game winning streak by losing three straight to fall back onto the bubble.

Furman: The Paladins won at Villanova early this season and entered Monday 41st in the NET, but their semifinal loss to UNC Greensboro could put them behind the Spartans in the Southern Conference pecking order if the selection committee chooses to give that league multiple bids.

Ohio State: Although the Buckeyes (18-13) rallied from a 23-point deficit to force overtime Sunday against Wisconsin, they still fell 73-67 for their third straight loss. Ohio State finished the regular season 8-12 in Big Ten play.

Texas: The Longhorns (16-15) have impressive nonconference wins over North Carolina and Purdue, but they're barely over .500 and have dropped four of their last five games. The tailspin continued Saturday with a 69-56 loss to fellow bubble team TCU. They'll need to do some damage in the Big 12 Tournament.