Arkansas and the SEC's top offense take on No. 12 Missouri 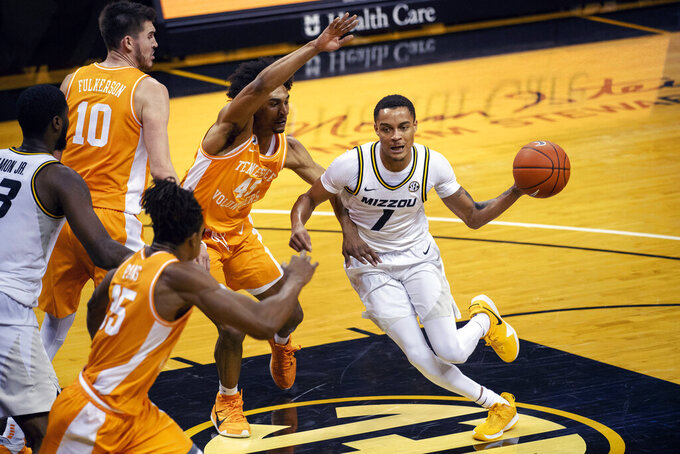 PLAYER TO WATCH: Texas A&M forward Emanuel Miller has thrived on both ends of the floor. Besides nearly tripling his scoring average from his freshman season from 6.4 points per game to 17.3, he’s shooting an SEC-best 65% from the field and leads the conference in rebounding at 9.2 per outing.

INSIDE THE NUMBERS: Conference scoring leader Cameron Thomas (24.1) has increased his point total each of the past four games. The LSU freshman had a career-high 32 in the Tigers’ 77-54 win over Texas A&M after scoring 29 against Nicholls State. ... Besides leading the SEC in scoring margin at 26-plus points per game, Arkansas and Tennessee are also 1-2 in rebounding margin at 11 and tied for 10th nationally. ... Kentucky freshman forward Isaiah Jackson had three blocks in a 62-59 loss to rival Louisville and has rejected at least one shot in every game, including eight against Kansas. He’s three behind Arkansas’ Connor Vanover with 18 blocks and averaging 2.6 per game.

No. 13 Kentucky (8-1, 1-0) at No. 12 Mississippi State (6-1, 1-0) meet Sunday in a game moved up from Jan. 24 to replace the postponement of Kentucky’s game at Tennessee following positive tests within the Volunteers’ program. The visiting Wildcats are coming off a 75-64 victory over No. 10 Arkansas, holding the high-scoring Razorbacks 27 points below their per-game average to give coach Kyra Elzy’s first SEC win since being named permanent coach last month. Defense also helped first-year Bulldogs coach Nikki McCray-Penson earn her first SEC win as MSU held Georgia to 33% shooting in a 69-62 road win.