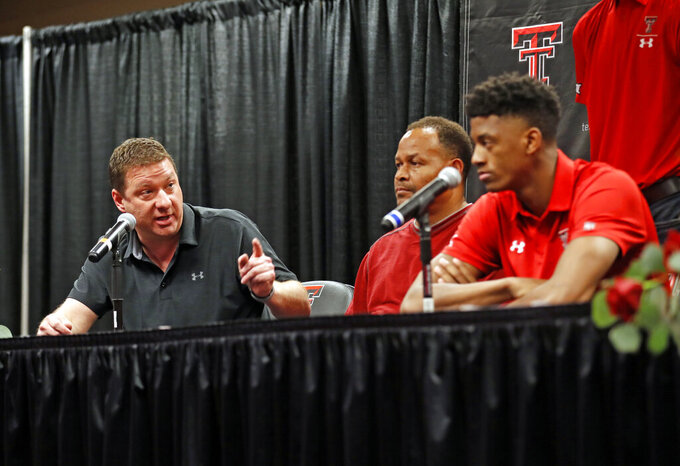 LUBBOCK, Texas (AP) — Texas Tech has made Chris Beard one of the nation's top-paid coaches in college basketball after he led the Red Raiders to their first national championship game.

Beard, the AP national coach of the year, got a new contract Monday that will pay him an average of $4.575 million annually through the 2024-25 season.

"In only three years, Chris Beard has elevated Texas Tech to the upper echelon of college basketball," athletic director Kirby Hocutt said. "The 2018 Elite Eight, and this year's appearance in the national championship game has raised the entire profile of Texas Tech athletics and is a source of great pride for all Red Raiders."

The deal came three weeks after the Big 12 co-champions lost in overtime to Virginia in the national title game.

It is the second year in a row that Beard has been rewarded with a new contract. The Red Raiders won a school-record 31 games this season, a year after going to the Elite Eight for the first time.

Beard has a 76-31 record in three seasons with the Red Raiders. He thanked school leaders, former and current players and staffs, and students and fans for their commitment to the program.

"Together we have accomplished some great things in the past three years but we are not satisfied and will continue working tirelessly to build one of the best college basketball programs in the nation," Beard said.

Beard was coming off a 30-win season at Arkansas-Little Rock in 2016 when he was hired by Texas Tech, where he had spent a decade as an assistant coach for Bobby Knight, and then Pat Knight, through the 2010-11 season.

Beard was then head coach for one season in the semipro American Basketball Association before stops at two lower-division schools in Texas and his standout season at Little Rock. He had then agreed to a five-year contract to be UNLV's coach before Tubby Smith unexpectedly left Texas Tech.

With Big 12 player of the year Jarrett Culver's recent decision to declare for the NBA draft, junior guard Davide Moretti will be the only one of Tech's top five scorers returning next season. Also gone with Culver, the 6-foot-6 sophomore guard from Lubbock, will be seniors Brandone Francis, Matt Mooney and Tariq Owens.

Mooney and Owens were graduate transfers to the program last year after the Elite Eight run, when All-Big 12 guard Keenan Evans was among five seniors gone and high-soaring freshman forward Zhaire Smith left early for the NBA draft.