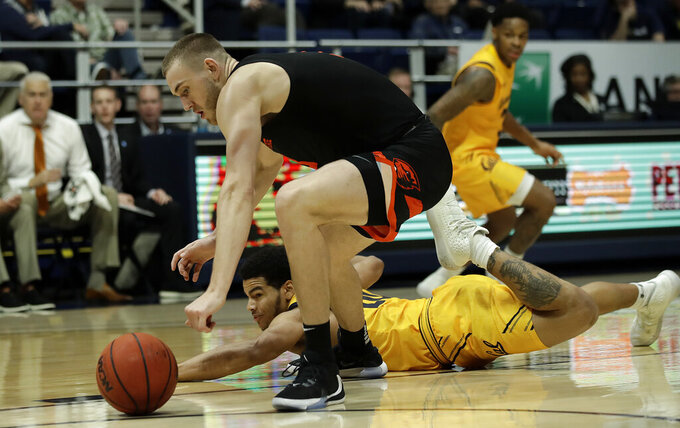 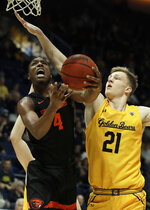 BERKELEY, Calif. (AP) — First-year California coach Mark Fox isn’t making much of a big deal about his team’s 4-4 start in the Pac-12. Although it’s a far cry from where the Golden Bears have been, Fox sees no reason they can’t get more.

Andre Kelly had 14 points and six rebounds, and Paris Austin scored 11 points for California, which is off to its best start in conference since 2016-17.

That’s a significant step for a team that won only five Pac-12 games over the past two seasons, though Fox isn’t doing much celebrating.

“I don’t know, I’m trying to worry about how to get 5-4," Fox said. "We played three good teams in seven days and they were hard-fought games. It took a lot of energy, emotionally, mentally and physically. To come out of the week with a couple victories for this group is progress. But we’re just going to try to win this next one and see how many we can tally up."

Oregon State missed three chances to go ahead after Bradley missed the front end of a one-and-one. Ethan Thompson had his shot blocked by Kelly but the Beavers grabbed the loose ball. Tres Tinkle was then called for charging. Bradley missed another free throw with 3.9 seconds left, then made the second to put California up by two. Thompson slipped in the backcourt after taking the ensuing inbounds pass but got the ball to Zach Reichle, who threw up a heave that hit the backboard as time expired.

“We were trading baskets for a while and then once we sat down and got some stops, we built separation and we kept scoring,” Bradley said. “That’s what did it.”

Tinkle had 19 points and seven rebounds for Oregon State (13-9, 3-7). Alfred Hollins added 14 points, including seven straight on free throws in the second half.

The Bears led most of the first half and were up 30–24 before Tinkle found his rhythm after missing four of his first five shots. Tinkle made a buzzer-beating jumper from the baseline, then added back-to-back buckets down low to cap an 8-0 run and give the Beavers a 32-30 halftime lead.

The game was stopped briefly in the second half after Kelly fouled Oregon State 7-footer Kylor Kelley. The two exchanged words and had to be separated by players from both teams. Following a brief review, both were called for technicals.

“He’s a good player. We were just going at it,” Kelly said of his Oregon State namesake. “Both passionate about the game, wanting to win. That’s all.”

Oregon State: The Beavers played well for most of the game and had a three-point lead with 4 ½ minutes left but couldn’t close the deal. A win would have been huge for momentum but with five losses in their last six games, the Beavers are facing a big uphill climb.

California: The technical against Kelly seemed to spark the Bears, who had been sporadic offensively until that point. Bradley came up big again and has been the team’s most consistent offensive threat. “Andre and I have been going to counseling together about where he should score from,” Fox said. “He’s really good inside and he was due. Once he got one to go in, his confidence came back and he was very aggressive.”

Kelly did all of his scoring in the second half after not taking a shot in the first half. Eight of his points came off offensive rebounds.

California: Plays at Colorado on Thursday.