Calling shots, not blocking them, Ewing leads Hoyas to NCAAs 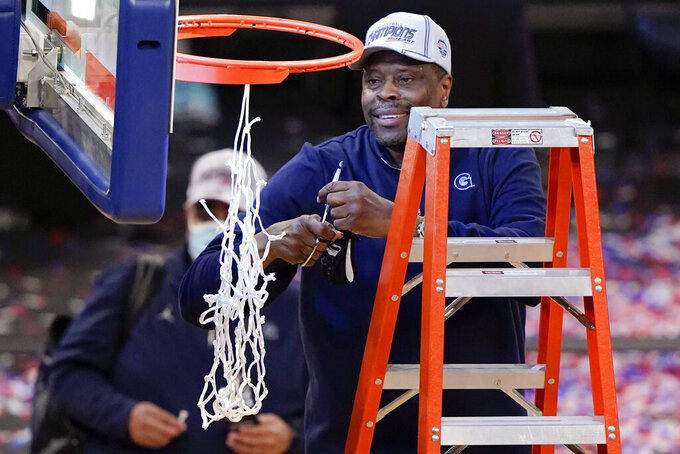 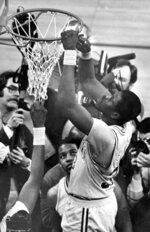 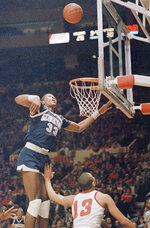 When Patrick Ewing thinks about the old days, about his 1980s college career at Georgetown as a dominant 7-foot center wearing a T-shirt underneath his jersey and No. 33 on it, this is what comes to mind:

“I should have three championship banners,” Ewing said in a telephone interview this week. “I only have one.”

That’s the takeaway? Focus on the misses, then mention success as an afterthought?

Well, let him explain his trio of final appearances under coach John Thompson, from the loss as a freshman against Michael Jordan, to the victory as a junior against Hakeem Olajuwon, to the loss as a senior against Rollie Massimino’s crew of near-perfect shooters.

“I got robbed versus North Carolina, with all of those goaltending calls. Beating Houston, going up against Hakeem The Dream — thank God, my team was much better. And unfortunately, losing to Villanova in ’85. But all of the experiences were great,” Ewing said from Indianapolis, where he will coach the No. 12 seed Hoyas against No. 5 Colorado in the East Region on Saturday, Georgetown’s first NCAA Tournament game in six years.

“That’s what college basketball is all about,” he continued. “On any day, any team can beat you or you can beat any team.”

For much of this season and, indeed, for much of his four years as the men’s basketball coach at his alma mater in the nation's capital, Ewing has been on the wrong side of that equation. So much so that the current edition, which included nine new players, was picked to finish last in the Big East — and then started 3-8.

None of that matters now. Ewing is back at the Big Dance. And so are the Hoyas (13-12), courtesy of an out-of-nowhere, offense-stifling, four-win run to the conference tournament title at Madison Square Garden, where Ewing played most of his Hall of Fame NBA career for the New York Knicks.

Adding to the unmistakable symbolism, the 73-48 upset of Creighton in the final happened to come 49 years to the day after Georgetown's hiring of Thompson, who died last August.

That's precisely what Gene Smith, Ewing’s college teammate and roommate, was thinking, too, while following along on TV. So Smith texted a 20-strong group chat populated by former Georgetown players and team managers.

“I started out with an expletive,” Smith said with a chuckle. “I mean, it’s one thing to win. But they were beating Creighton’s behind! That was pretty crazy."

In Ewing the Coach, Smith sees remnants of Ewing the Player.

“There’s no quit in him. There’s no fear in him,” Smith said. “I’ve never seen anyone go after a 50-pound weakling with the same ferocity he goes after a 500-pound rhinoceros.”

He also sees traces of Thompson, the towering figure in charge of the Hoyas from 1972-99.

Ewing, who has draped a white towel over his shoulder during games as a tribute to his mentor, embraces the idea of representing the man known as Big John.

Truth is, Ewing wasn’t expected to be a coach at all.

Not because he couldn’t, of course.

"I remember it like it was yesterday: Patrick had a sense of where he was, and where the other four guys on the team were, and the five guys on the other team were, at all times,” said Craig Esherick, a Georgetown assistant when Ewing was in college, then Thompson’s successor. “There clearly was an interest in the thought process behind offensive and defensive systems.”

Still, as pointed out by Jeff Van Gundy, who coached Ewing with the Knicks and later hired him as an assistant with the Houston Rockets, "You just don’t usually see the greatest of the great players go into coaching. His acumen for the game and his intensity and passion — you knew he could do it. I just never thought for a moment he’d be interested.”

“You thought when it was all over with,” said Mark Jackson, a Knicks teammate, “he’d ride off into the sunset.”

Even Ewing acknowledges he “never had an inkling” during his playing days he would coach. A conversation with Johnny Davis, an Orlando Magic assistant during Ewing’s final pro season, helped change his mind.

Jordan offered Ewing his first sideline gig, with the Washington Wizards. That launched a 15-year, four-team odyssey as an NBA assistant.

“There’s a whole lot of people that would not have put up with that,” Esherick said. “It shows that Patrick has perseverance. And he has some humility."

Georgetown — and Thompson, helping find a replacement after his son was fired — came calling in 2017.

“We didn’t think that Coach Ewing would be interested in college coaching,” said Reed, the AD. “But here’s a guy who had success at literally everything he’s done in his life.”

“He was clear about his goals of wanting to get Georgetown basketball back to national prominence and consistently nationally relevant,” Reed said. “He talks to his guys about that — about being Big East champions, about being national champions.”

There’s still work to be done, of course.

Among the fan base, there was “scuttlebutt” — as Smith put it, choosing a word Thompson was fond of — that Ewing’s job status was shaky.

But after three weeks in January without any games because of a coronavirus quarantine, the team began turning things around.

Senior forward Jamorko Pickett said Ewing called every player during the hiatus to discuss whether roles needed to change. Later, Ewing inserted another senior forward, Chudier Bile, into the lineup.

Then came the Big East Tournament.

And now comes the NCAA Tournament.

“You had to know that it was only a matter of time, with Coach Pat being the man in charge," Pickett said, "that eventually the team would be back to what it was before.”