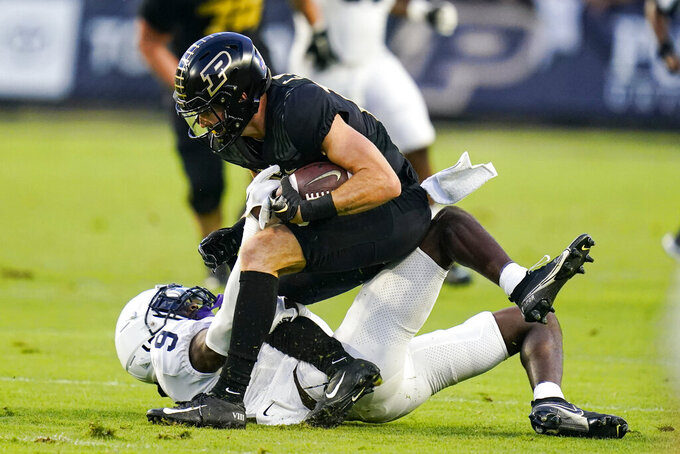 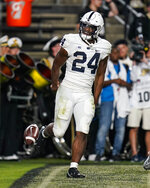 It may have saved Penn State’s conference title hopes.

The sixth-year quarterback hooked up with Keyvone Lee on a 10-yard touchdown pass with 57 seconds left, rallying the Nittany Lions to a 35-31 victory in their season opener at Purdue.

“It was very impressive,” coach James Franklin said when asked about the eight-play, 80-yard drive. “We work on the 2-minute drill all the time and it worked out for us right there. You can learn a lot in games like this and I’d rather learn them with a win.”

It was a rollercoaster night as Clifford opened his sixth college season.

He narrowly escaped a right leg injury in the first half then dealt with cramps in the second half, forcing him to miss a series in the third quarter.

He appeared to put the Nittany Lions in control by hooking up with Brenton Strange, who broke two tackles on his way to a 67-yard score with 2 seconds left in the first half. That gave the Nittany Lions a 21-10 lead.

He didn’t complete a pass after returning in the third quarter and then almost gave the game away when he overthrew Mitchell Tinsley and Chris Jefferson picked off the errant pass and returned it 72 yards for a touchdown to give the Boilermakers a 31-28 lead midway through the fourth quarter.

And then, he came through in the clutch to give Penn State its 10th straight win in the series. Clifford finished 20 of 37 with 282 yards and four scores

It sure wasn’t easy in front of a near-capacity crowd and a game that featured seven lead changes.

“It was a gutsy win,” Franklin said. “We showed a lot of character. We've got to make more plays on offense, obviously.”

Penn State’s defense also had to contend with a little bit of everything. King Doerue ran for two scores, Aidan O’Connell threw for 356 yards and another score and he celebrated his 24th birthday by connecting with childhood friend Charlie Jones 12 times for 153 yards and a 17-yard TD pass.

Still, they came up one first down — and perhaps one replay review that overturned a late catch — short.

“Every loss hurts and we had this one right where we wanted it — a chance to seal the game, one more first down we win the game,” Purdue coach Jeff Brohm said. “We apologize (to the fans) we weren’t able to get it done.”

Penn State: The Nittany Lions needed this win to stay in contention in the Big Ten East Division and they got it — barely. Clifford may have averted a quarterback controversy with his late heroics. But the ground game averaged 3.2 yards per carry last season generated just 3.1 on Thursday.

Purdue: An opening-night win certainly would have made a big statement in the wide open West. Instead, the Boilermakers home crowd went home deflated. Now they'll try to regain some of the the momentum they started building with last year's nine-win season.

A replay review showed Carter making helmet-to-helmet contact with Boilermakers receiver Tyrone Tracy after Tracy dropped a pass near the line of scrimmage. Carter did not record a tackle.

Though the organization is not affiliated with the university, it hopes to raise $6 million to provide NIL funding for 385 Purdue athletes — including the entire football and men’s basketball teams. The goal is to raise the profile of charitable organizations in Indiana and across the country.

Other former Purdue stars such as Jim Everett, Robbie Hummel, Matt Light and Shaun Phillips also are on the board.

KEEPING UP WITH JONES

Jones transferred from Iowa to Purdue so he could team up with O'Connell and on opening night, it looked like a natural combination.

O'Connell threw 19 of his 58 passes to the sixth-year receiver and Jones produced single-game career bests in receptions and yards.

“We had a feeling Charlie would be a go-to guy when we got him here,” Brohm said. “He runs good routes, has good hands and ha s a good chemistry with Aidan and that showed up today.”