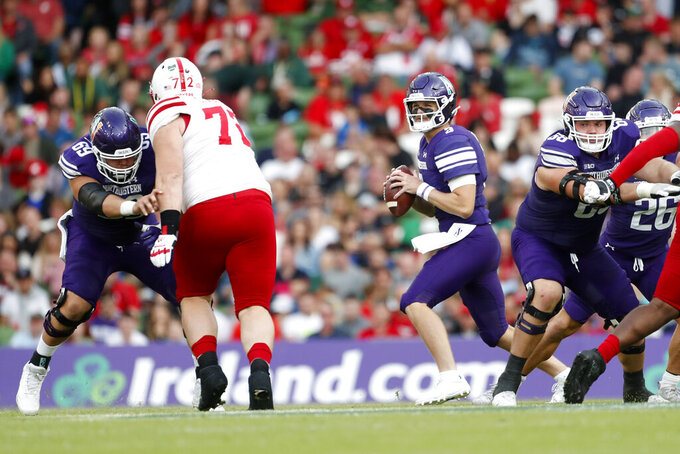 Northwestern quarterback Ryan Hilinski (3) looks to pass during the first half of an NCAA college football game against Nebraska, Saturday, Aug. 27, 2022, at Aviva Stadium in Dublin, Ireland. (AP Photo/Peter Morrison)

Line: Northwestern by 9½, according to FanDuel Sportsbook.

Both teams are looking to build on promising openers. Duke rolled over Temple 30-0 last week in coach Mike Elko's debut — the Blue Devils' first shutout since 2015 and their first against a Bowl Subdivision opponent since beating rival North Carolina 41-0 on the road in 1989 under Steve Spurrier. Northwestern rallied to beat Nebraska 31-28 two weeks ago in Dublin in the first regular-season international college football game in five years. The Wildcats are also looking to keep their recent pattern going with another big bounce-back season. In the past four years, they've gone from winning the Big Ten West in 2018 and finishing last in 2019 to winning the division in 2020 and dropping to the bottom again in 2021.

Duke DT DeWayne Carter vs. Northwestern's offensive line. Carter had 4 1/2 sacks as the team's top lineman last year. His ability to create havoc could determine which team comes out on top.

Duke: WR Jordan Moore. Moore is the backup quarterback but also sees work at receiver with his athleticism, offering playmaking the Blue Devils desperately need. He had six catches for 77 yards with a touchdown grab in the opener against Temple.

Northwestern: QB Ryan Hilinski threw for 314 yards and two touchdowns without getting picked off in the opener, a promising start for a player who was part of a mix at the position that struggled last season. Hilinski, who made five starts and nine appearances, had more interceptions (four) in 2021 than touchdowns (three) while throwing for 978 after transferring from South Carolina.

Duke has won three straight in the series since Northwestern's victory at Ryan Field in 2016. ... Duke QB Riley Leonard completed his first 15 passes in the opener — his second career start. ... Elko’s arrival marks the first time since the 1942-43 season that the Blue Devils had a new football and men’s basketball coach at the same time. Former Duke men’s basketball player and assistant Jon Scheyer is taking over this year for retired Hall of Famer Mike Krzyzewski. ... Northwestern, which first fielded a team in 1892, had never played outside the United States until the opener against Nebraska in Ireland. ... The Wildcats totaled 543 yards on offense against Nebraska. ... Wildcats RB Evan Hull, who ran for 1,009 yards last season, had 119 and a touchdown on 22 carries in the opener.