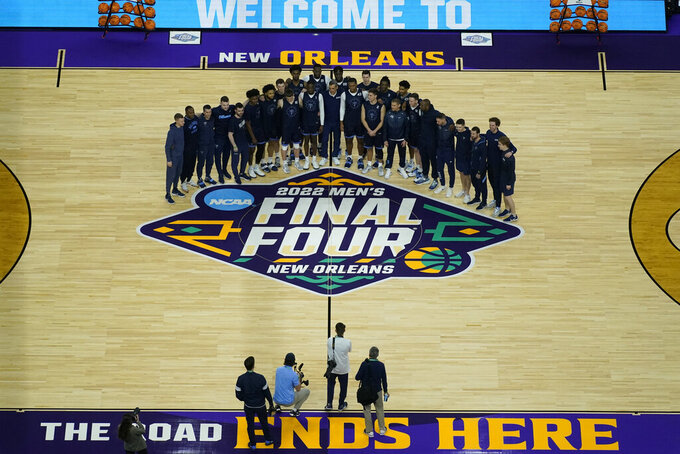 NEW ORLEANS (AP) — North Carolina has won six national championships and reached more Final Fours than any program in college basketball. Duke has claimed five titles under retiring coach Mike Krzyzewski and Kansas just surpassed Kentucky for the most wins in the history of the game on its way to the Final Four.

Nobody disputes the blueblood status of any of those programs.

The controversy — or just the conversation — really picks up when the discussion turns to Villanova, which joined the Tar Heels, Blue Devils and Jayhawks this weekend in New Orleans. They've reached their seventh Final Four and are chasing their fourth national title, which would put them on par with UConn and one behind Duke and Indiana.

“I do feel something about being here with them. Hell yeah. We have great respect for them,” acknowledged coach Jay Wright, who has led the Wildcats to the past two titles in 2016 and 2018 after Rollie Massimino delivered the first in 1985.

“But we never aspire to be one of those programs," Wright continued. "In fact, we fight the urge to try to be like them, because we're just so different. We try to be the best Villanova we can be. But when people on the outside connect us to them or count us as part of their legacy or tradition, we love it, because we have so much respect for them.”

If what Villanova has accomplished over the past four decades isn't enough to achieve blueblood status, then what does it take?

A quick survey of a dozen people at the Final Four on Friday, including players and coaches for each of the national semifinalists, the definitions varied.

Former players and coaches, fanbases, venues and success was a big part of every definition. But the three elements that came up most often were history, culture and consistency.

“I feel like bluebloods are the best of the best,” the Jayhawks' Joseph Yesufu said. “It's a tradition.”

The Tar Heels easily check off every box: Michael Jordan and Tyler Hansbrough were among their many stars on the court, and Frank McGuire, Dean Smith and Roy Williams led them to titles spanning six decades. They trail only the Jayhawks and Kentucky on the wins list heading into their national semifinal against Duke on Saturday night, and if mystique is a requirement, head to the Dean Smith Center and watch first-year coach Hubert Davis stalking along the sideline.

Or watch them play just down the road at Duke, which also checks every box. Coach K has turned a program that started to hoop in 1905 into a juggernaut, featuring everyone from Christian Laettner and Shane Battier to JJ Redick and Bobby Hurley, and there are few atmospheres that can rival Cameron Indoor Stadium on a cold winter's day.

One of them is Allen Fieldhouse, where Kansas plays on a floor named for the inventor of the game — it doesn't get much more historic than that. And while the Jayhawks have struggled to hang championship banners, losing more title games than anyone else, that hasn't damaged the perception that their program belongs among the elite.

“Our program, without question, it's one of the top programs in the country,” Kansas coach Bill Self said, “and nobody can debate that at all. But to be thought of as the equal of anybody else, we have to cut down nets on Monday night, and we need to do more of that.”

Like Kentucky, with its eight titles spread among four coaches over seven decades. Or UCLA, which holds the record with 11 titles between John Wooden and Jim Harrick. Just about every basketball fan agrees they are basketball bluebloods.

“A blueblood program is a program of consistency over a period of time,” opined Villanova guard Eric Dixon, “one that has both a history of success and is doing well in the present.”

But just how present? The Hoosiers are 5-1 in national title games, winning two championships under Branch McCracken and three under Bob Knight, but their last came in 1987 and they haven't reached the Final Four in two decades.

The Spartans are perennial contenders, reaching the national semifinals 10 times, but their only championships came from Jud Heathcote in 1979 and Tom Izzo in 2000 — six Final Fours since then have failed to produce another one.

“I would just say consistency is most important,” Kansas guard Christian Braun said. “That's what you see when you look at all of those programs. I also would say the leader matters. All of these schools have great leaders.”

It doesn't get much better than Phog Allen, Larry Brown and Self at Kansas, or Adolph Rupp, Joe B. Hall, Rick Pitino, Tubby Smith and John Calipari at Kentucky. Wooden is the gold standard at UCLA and Coach K belongs in the same realm, while McGuire, Smith and Williams have kept the Tar Heels relevant for most of the past seven decades.

If winning in the present matters, it's getting hard to keep Wright out of the conversation at Villanova.

“A blueblood is a really successful program that was built from the ground up,” the Wildcats' Jermaine Samuels said. “ We are really grounded in our habits and our values every day. I don't know how I would fit us in the blueblood talk and all that, I would just say we play for those that came before us.”

One thing seems clear, there is no one definition to what makes a program one of the bluebloods.