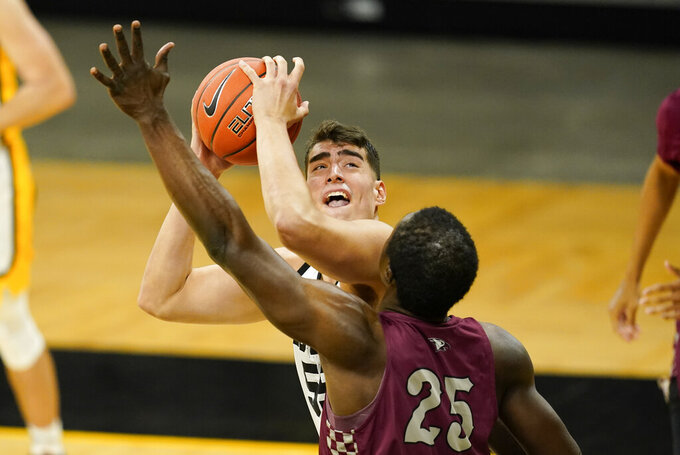 Not even the new fadeaway that Garza unveiled Wednesday in a 97-67 victory over North Carolina Central.

Garza had 26 points and 10 rebounds to help the Hawkeyes win their 10th consecutive opener.

“Whenever it leaves his hand, you’re surprised when it doesn’t go in,” McCaffery said. “He just has an uncanny knack, and touch, around the basket, and it also extends out on the floor, which makes him a handful to guard. We’re just thrilled that he keeps working and he’s such an unselfish guy.”

The Big Ten player of the year last season and the lone unanimous selection on the preseason AP All-America team, Garza had his 17th consecutive game of 20 points or more. He was 11 of 14 from the field against constant double-teams.

“You know, I think that’s a move I’ve worked on a lot,” Garza said about the shot in the second half that had him smiling as he headed to the other end of the court. “Trying to add some moves in the post, and just trying to get comfortable making different moves. It was nice to get that one through.”

The senior center had just four points in the first 10 1/2 minutes before the Hawkeyes took control with a 20-2 run near the end of the first half. He had six of Iowa’s final nine points in the run.

“I think we kind of sped them up, and we got to the glass,” Garza said. “We started pressing, getting steals, and then obviously getting back to the glass for second shots.”

The Hawkeyes, with all five starters back from a team that was 20-11 last season, trailed for the first six minutes.

“I felt a lot more comfortable this time around than I did last year,” Patrick McCaffery said. “It was a lot of fun just being back out there.”

He played in two games last season before health issues sidelined him for the rest of the season.

“He’s such a skilled offensive player,” Garza said. “He worked a lot to get here, and I’m excited for him.”

“They did a good job early, being aggressive,” Garza said about the Eagles.

Iowa’s players had the word EQUALITY under the numbers

on the back of their jerseys. Players and coaches kneeled before the game as a statement about racial injustice was read by the public address announcer, and then they stood for the national anthem. “We were in support of those words, 100 percent,” Fran McCaffery said. “That’s why we knelt. And then they also felt strongly about standing for the national anthem. I respect that, immensely. I’m proud of them.”

Coaches and managers for both teams wore masks because of the COVID-19 pandemic. The bench area consisted of four rows of seats. Iowa’s players and coaches had assigned seats.

Iowa was without sophomore forward Jack Nunge. Nunge’s father, Mark, an emergency services physician in Newburgh, Indiana, died Saturday. A moment of silence was held before the game, and the Hawkeyes gathered as a team earlier in the day to virtually attend Mark Nunge’s funeral. “It was important for us to do that,” Fran McCaffery said. “We’re pretty regimented with our pre-game routine, and that’s not something that you never want to also have to schedule. But we love Jack, we’re there for Jack.” “We’re just trying to be there for him, and that’s what we were trying to do this morning,” Garza said.

Iowa looked sluggish early, trailing for the first six minutes. A strong opening game for Patrick McCaffery means more frontcourt depth for the Hawkeyes. North Carolina Central had to pause workouts last week because of a positive COVID-19 test, but the Eagles led early in the game before fading at the end of the first half.