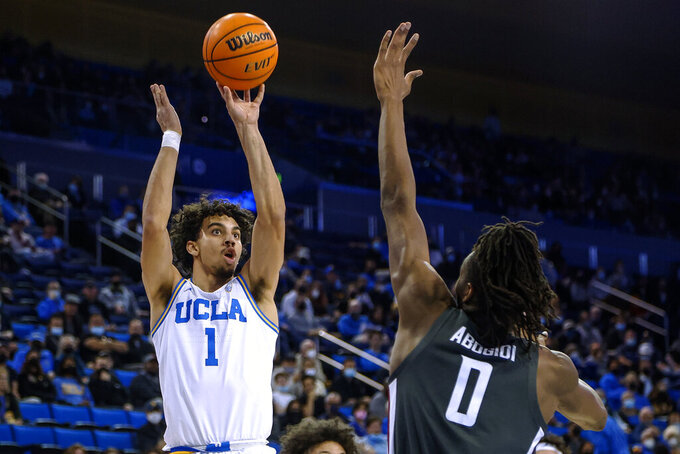 LOS ANGELES (AP) — UCLA's Jaylen Clark made the most out of his rare start.

The sophomore guard was inserted into the starting five with Tyger Campbell being benched due to a violation of team rules and had a career-high 18 points and 11 rebounds in the 13th-ranked Bruins' 76-56 victory over Washington State on Thursday night.

Coach Mick Cronin looked at Clark's performance as a triple-double, though, by factoring in 12 pass deflections on defense.

“He's had a tough year with injuries," Cronin said. "This is the first week in like two months he's been able to string together three straight practices. So he's slowly getting into shape.”

With Johnny Juzang on the bench most of the first half due to foul trouble, Clark was UCLA's offensive catalyst early. He either scored or had an assist on 22 of the Bruins' first 26 points.

Clark had 12 points in the first half en route to his first double-double. He also had five assists and four steals.

“I’m finally starting to find my shot, but I was focused on the defensive side guarding (Washington State’s Michael) Flowers and letting the offensive side take care of itself,” Clark said.

Juzang led the Bruins with 19 points, with 16 coming after halftime.

“We’re all happy for him, but no one is surprised,” Juzang said about Clark.

UCLA (18-5, 10-4) had dropped three of four coming into the game, but easily controlled things from the opening tipoff and led throughout. The Bruins scored the first nine points — including four by Clark — and jumped out to a 15-5 lead less than six minutes into the game.

The Cougars made only two of their first 15 shots and were 1 of 9 beyond the arc during the first 10 minutes.

A 3-pointer by Jules Bernard gave UCLA a 31-17 advantage with 5:48 remaining in the first half.

Washington State trailed 39-29 at halftime but made a 8-2 run to get within four. The Bruins put it out of reach with a 15-1 run. The Cougars went nearly eight minutes between field goals and were outscored 20-6 during that span.

“We got some good looks, but you have to make them. We are a little mental right now,” coach Kyle Smith said. “Our bigs have to do a better job of putting pressure at the rim. We’re going to have to get something done inside.”

Cronin said after the game that Campbell would be back in the starting lineup. It was the first time in three seasons the junior guard had missed a game.

“For three years he has been awesome,” Cronin said of Campbell. “If you have rules and don't enforce them, then you don't have rules.”

Flowers had averaged 17.6 points in the past five games, but was held to 3 points on 1-of-8 shooting from the floor.

Washington State: The Cougars have dropped 11 straight at Pauley Pavilion and fell to 3-61 all-time. Four of the losses have been by at least 20 points. Their last win on the Bruins' floor was 2009.

UCLA: The Bruins were 10 of 20 on 3-pointers, marking only the fourth time this season and first in Pac-12 play that they reached double digits from beyond the arc.

“It's nice to finally knock down some open looks,” Cronin said.

Washington State: Remains in Los Angeles to face No. 17 USC on Sunday.