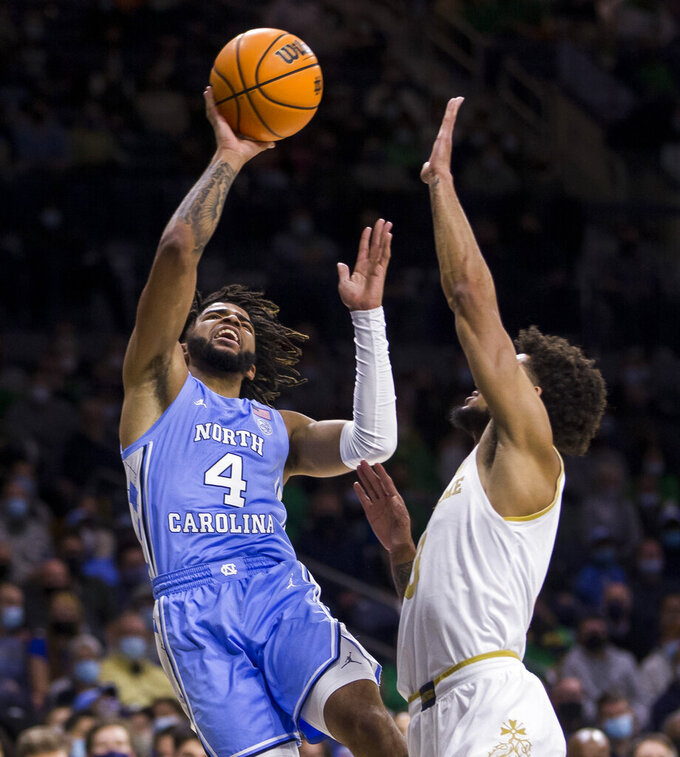 North Carolina's RJ Davis (4) goes up for a shot next to Notre Dame's Prentiss Hubb during the first half of an NCAA college basketball game Wednesday, Jan. 5, 2022, in South Bend, Ind. (AP Photo/Robert Franklin)

SOUTH BEND, Ind. (AP) — Nate Laszewski scored a season-high 20 points, including consecutive 3-pointers to give the lead back to Notre Dame, and the Fighting Irish held on for a 78-73 victory over North Carolina on Wednesday night.

The Tar Heels rallied from a 13-point second-half deficit to take the lead on an Armando Bacot bucket before Laszewski hit back-to-back 3s, the second coming with two minutes left, to give Notre Dame (8-5, 2-1 Atlantic Coast Conference) back the lead for good.

RJ Davis made two 3-pointers to keep UNC (10-3, 2-1) close but the Irish, who had only four free-throw attempts previously, made 6 of 7 from the line to secure Notre Dame's fourth straight win.

Laszewski made 6 of 7 from the arc and grabbed eight rebounds. Blake Wesley added 18 points, Dane Goodwin 17 and Cormac Ryan 11. Notre Dame shot 48%, made 13 of 31 3-point attempts and had just seven turnovers.

Wesley scored seven of his 13 first-half points in a 12-2 run for a 10-point lead with nine minutes left. Bacot already had his 10th double-double of the season by halftime with 13 points and 11 rebounds. He scored seven points in a 16-10 run to end the half and cut Notre Dame's lead to 39-35.

UNC was without 6-foot-11 starter Dawson Garcia, a double-figure scorer and second-leading rebounder for the Tar Heels. He suffered a concussion early in Sunday's win over Boston College. Reserves Kerwin Walton and Justin McKoy were also out because of COVID protocols.

Notre Dame beat UNC for just the second time in the last 11 meetings.

This was Notre Dame's first game since Dec. 28 after a New Year's Day game with Duke was postponed because of COVID issues within the Blue Devils program.

UNC is host to Virginia on Saturday while the Fighting Irish are at Georgia Tech.