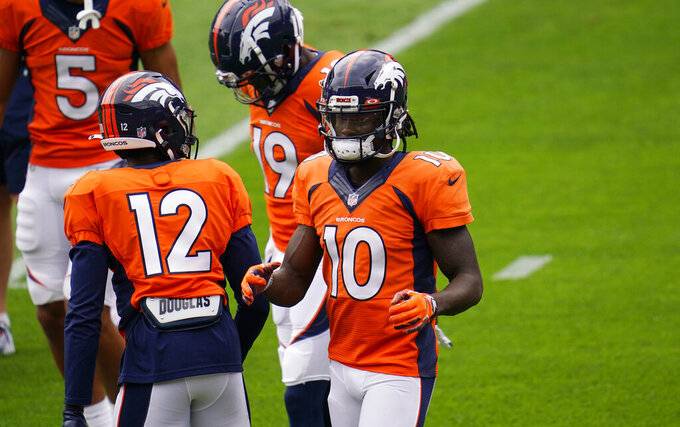 FILE - In this Aug. 29, 2020, file photo, Denver Broncos wide receiver Jerry Jeudy takes part in drills during NFL football practice in Denver. While the Broncos are heading into another lost season, there is one bright spot on the field—the team's rookie wide receivers Jeudy and KJ Hamler are excelling in the NFL. (AP Photo/David Zalubowski, File)

Washington State athletic director Pat Chun says the school has nine football players in COVID-19 protocols and four players had to be put into the protocol Friday morning leading to the cancellation of the Cougars' game at Stanford.

Chun said as of last weekend, the Cougars had zero players in their COVID protocols and the first positive test came early in the week. The four positives Friday morning kept the Cougars from reaching the Pac-12 mandate of 53 scholarship players available.

Chun said it was too early to know whether next Friday’s Apple Cup against rival Washington will be played as scheduled. He said figuring out the situation around the Apple Cup would begin Sunday.

“We’re going to get through tomorrow as planned and come Sunday we’ll start making our daily assessments about where our roster is at and where we’re at with everything related to trying to field a team on Friday,” Chun said.

These are the first two positive tests since the players reported back in June.

The school said it will work with the Mountain West Conference to discuss how the hiatus affects the start of the Rams’ season.

The Las Vegas Raiders have activated defensive back Lamarus Joyner from the COVID-19 list.

Coach Jon Gruden says he has no update yet on which of the other 10 players on the team on the COVID-19 list will be activated in time to play Sunday.

Joyner was placed on the COVID-19 list Tuesday as a “high risk” close contact after teammate Clelin Ferrell tested positive for the coronavirus. Seven other defensive players were added to the list Wednesday as “high risk” contacts and are on track to be cleared to return before Sunday night’s game against Kansas City.

Right tackle Trent Brown and linebacker Cory Littleton are also on the list.

Three Cincinnati Bengals assistant coaches will not be available for Sunday's game at Washington due to COVID-19 protocols.

No. 8 Illinois is trying to find a replacement opponent after Wright State pulled out of next week’s men’s basketball game because of a COVID-19 outbreak within its program.

The teams were scheduled to play Thursday at Illinois. But Wright State canceled, saying it would not have enough players available because of positive tests and close contacts as well as injuries.

Illinois said it will try to plug in an opponent. The Illini are now scheduled to open the season Wednesday against North Carolina A&T and meet Ohio on Friday.

“As we all struggle through this unprecedented year, we are often reminded of what is most important,” coach Anthony Bozzella said in a statement. “For us, without question, it’s the health of these remarkable young women, my staff and managers.”

The Bellarmine men’s basketball program has paused team activities amid the pandemic, delaying the school’s Division I debut until Dec. 4 at No. 9 Duke.

The Knights were scheduled to open Wednesday at Chattanooga and make their home debut against Transylvania on Nov. 28 at Freedom Hall, the former longtime home of the crosstown Louisville Cardinals. Chattanooga will visit on Dec. 9 in a reshuffled schedule that delays Bellarmine’s Dec. 1 meeting with Dayton until later next month along with the trip to Chattanooga. Transylvania will visit on Jan. 1.

Athletic director Scott Wiegandt said in a statement, “This year has been a trying time for all of us, but 2020 has taught us that we have to adapt, and that’s what we have to do in this situation. Putting the health and safety of our student-athletes ahead of everything else is the right decision, and hopefully our fans cans adapt along with us.”

Seventh-ranked Cincinnati’s game against No. 25 Tulsa has been moved again in a shuffling of the American Athletic Conference football schedule.

The Bearcats and Golden Hurricane are now set to play Dec. 12, a week before the planned date of the conference championship game. The game was originally scheduled for Oct. 17, then moved to Dec. 4.

The AAC also announced new dates for five other games postponed because of COVID-19 issues. The first is Memphis at Navy on Nov. 28.

Three games have been set for Dec. 5: Houston at SMU, Memphis and Tulane and Tulsa at Navy. Houston at Memphis was rescheduled for Dec. 12.

The Basketball Hall of Fame has canceled the Hoophall Classic usually played on the Martin Luther King Jr. holiday weekend because of the coronavirus pandemic.

It would have been the 20th edition of the high school showcase.

More than 100 future NBA players have taken part in the event, including Anthony Davis, Kevin Durant, Kyrie Irving, Jayson Tatum and Zion Williamson. Among those playing in 2020: LeBron “Bronny” James Jr., with his father watching in the stands.

The Springfield, Massachusetts-based Hall of Fame says it hopes to relaunch the event in 2022.

The Denver Broncos have told season ticket holders that due to the increase of COVID-19 cases, Sunday’s game against the Miami Dolphins will be the last one played with fans in attendance at Empower Field at Mile High this season.

The Broncos have been allowing 5,700 fans into their games.

The Broncos’ final three home games, against the Saints, Bills and Raiders, will be played without any fans in the stands.

In a statement, the Broncos said, “Although we are confident in our strong safety protocols and have no evidence of any COVID-19 transmission traced to our home games, the increase in cases and hospitalizations locally requires us to adjust our future plans. Taking this precaution is consistent with the recent guidelines issued by local officials to limit gatherings with the holiday season approaching.”

The Trojans will still play Middle Tennessee on Saturday, with special teams coordinator Brian Blackmon serving as interim coach of the Alabama school. Lindsey’s positive came from the team’s weekly testing on Wednesday for players and staff. The school said Friday that Lindsey “is experiencing very mild symptoms” and is isolating.

“While this is a situation that we had hoped we wouldn’t have to account for this season, it is something that we’ve had a comprehensive plan in place for since the start of preseason camp,” Lindsey said.

Because of scheduling issues stemming from the pandemic, this is the second game this season between Troy and Troy and Middle Tennessee. The Trojans won 47-14 on Sept. 19.

The New York Giants have had three more players test positive for COVID-19. The Giants, who have a bye this weekend, learned about the results Thursday night and told the unidentified players to self-isolate. Contract tracing has started.

Earlier this week, placekicker Graham Gano tested positive and punter Riley Dixon and long snapper Casey Kreiter were told to isolate because they had close contract with Gano. All three were placed on the Reserve/COVID-19 list.

The Giants (3-7) have had five players test positive this season. Starting left guard Will Hernandez tested positive in late October before a game with Tampa Bay on Nov. 2. He missed two games and returned last weekend against Washington.

Coaches and players have this weekend off. They are scheduled to return to work on Monday on an adjusted schedule.

New York’s next game is at Cincinnati on Nov. 29.

Totti writes on Instagram that he has recovered after “15 long days” of medical care at home. The 44-year-old Totti says he struggled to get a fever to subside and lost strength.

Totti’s father died last month from the coronavirus at 76.