Lavin eager to leave TV, get back into coaching at San Diego 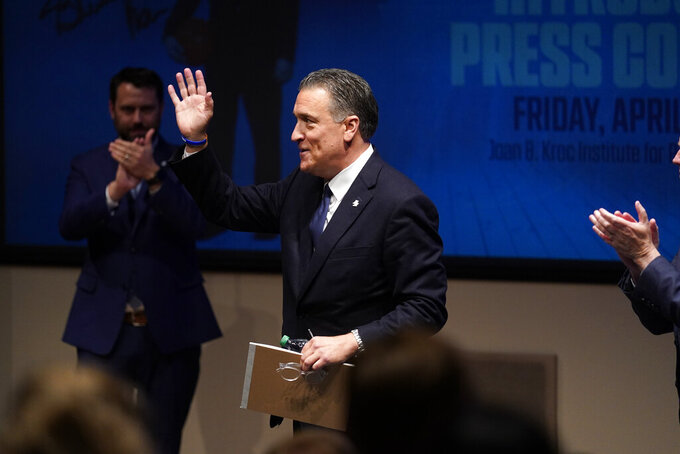 SAN DIEGO (AP) — Steve Lavin was eager to leave college basketball broadcasting and return to coaching, even it means being in the same conference as Gonzaga and Saint Mary's.

Lavin was introduced Friday as coach at San Diego, which has struggled for the better part of the last 15 seasons, and not always because of the tough teams that are perennially at the top of the West Coast Conference.

Lavin, 57, who was an NCAA Tournament regular as coach at UCLA and St. John's, said he told his new team that he missed being on a college campus and the camaraderie with the players and staff.

“When you’re a broadcaster, you’re undefeated," Lavin said at a campus news conference. “That’s wonderful, to be undefeated, but that’s not the same experience. This has more meaning. That's why, almost like an extended sabbatical, I enjoyed my time in television but I ultimately want to come back to coaching because I miss it.”

Lavin was hired after extensive interviews with Toreros athletic director Bill McGillis during the Final Four in New Orleans. The two flew back to San Diego together on Wednesday night, when the school announced the hiring.

McGillis said USD's players, who sat in the first two rows at the news conference, “are interested in competing at a championship level and I wanted to find a head coach who could bring the attributes to do that. We found a great head coach, a great leader who can help shape this program for the next decade.”

Lavin replaces Sam Scholl, who was fired March 6 after the Toreros went 15-16, the third straight losing season in his four-year tenure. San Diego has had just four winning seasons and one NCAA Tournament appearance — as well as a point-shaving scandal — under three coaches since Brad Holland was fired after going 18-14 in 2006-07.

Holland, who played at UCLA and then for four years in the NBA, was 200-176 in 13 seasons at USD. He was fired in part because the athletic administration back then wanted to be more like Gonzaga and went as far as to hire Zags assistant Bill Grier. USD won the conference tournament and went to the NCAA Tournament in Grier's first season but had just one winning season in Grier's next seven seasons.

Lamont Smith had one winning season in his three years as coach. Scholl was elevated to interim coach late in the 2017-18 season after Smith was placed on administrative leave following an arrest on suspicion of domestic violence. No charges were brought against Smith, who resigned.

Lavin brings an impressive resume. He was 237-150 in 12 seasons with UCLA and St. John's, with eight NCAA Tournament appearances and two NIT trips. His first team at UCLA reached the Elite 8 and the Bruins went to the Sweet 16 four more times in the next five seasons. He missed the NCAA Tournament just once in seven seasons in Westwood.

At St. John's, he went to the NCAAs twice and the NIT twice. He missed most of the 2011-12 season at St. John's after having surgery for prostate cancer.

Lavin said there's no magic formula to catching Gonzaga and Saint Mary's other than to work hard every day.

Lavin said he wants to give the players “a fresh start, kind of a blank canvas because I’m a different coach than the previous coach. I told them today the greatest way we can honor Sam Scholl is by taking the baton and moving it forward.”

Lavin said the first step is to try to get into the top four teams in the WCC.

“Then you have a chance for winning big. You study what the competition is doing if you're in the top four in the league, and then we have to build our own rocket if we're going to have a mission in space, to the stars.”

Said McGillis: “This is not a job for the faint of heart. ... There is no ceiling at the University of San Diego and for this basketball program.”

Lavin said it was hard for him to express how grateful he was, “and I don't want to mess it up.”