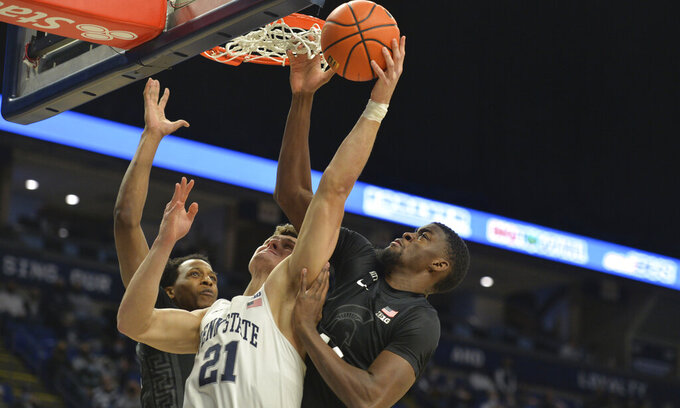 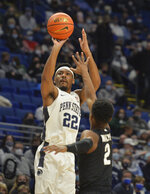 As the first-year Penn State coach watched the pregame shootaround, he couldn’t take his eyes off counterpart Tom Izzo at the other end of the court.

“The standard-bearer for our league,” Shrewsberry said. “I’m like, ‘Man, he’s about to tie Bob Knight for Big Ten wins for coaches.’ That’s so impressive. That’s longevity man.”

Seth Lundy hit a go-ahead 3-pointer with 1:37 remaining and finished with 17 points as Penn State beat No. 19 Michigan State 62-58 on Tuesday night.

“Every year I’ve been here, we’ve beat a ranked team at home,” Harrar said. “I was telling (the guys), ‘Lets go get one tonight.’”

Michigan State opened the second half with an 8-0 run, and just over four minutes later, had its biggest lead of the game at 43-29 on a jumper by Marble.

Sessoms helped spark Penn State’s comeback. He hit back-to-back shots and fueled a 15-2 run over the next 4:39.

“When we had some letdowns, they were major letdowns,” Izzo said. “Pretty tough loss for us, but we got what we deserved.”

The Nittany Lions cut the lead to one twice before a pull-up jumper by Lundy gave them their first lead of the half with 1:37 left.

“They say, you know, just let it come to you,” Lundy said. “Catch and shoot every single time and that’s what I did tonight.”

The Spartans took control early with a balanced first-half approach.

Six shooters scored in the opening 9:17. Max Christie hit a mid-range jumper to give Michigan State a 16-9 lead midway through the half. Meanwhile, the Spartans held Penn State to just 8-for-29 shooting from the floor and got four blocks over the first 15 minutes.

Penn State adjusted its strategy as the first half wore on, opting for outside shots as the Spartans controlled the paint.

Pickett, who scored 10 points in the first half, made a pair of 3-pointers, including one off a fast break, to tie the game at 22-all with 1:59 left in the first. He added a pair of free throws before a Mady Sissoko bucket made it 24-all at halftime.

Shrewsberry also picked up his first technical foul. The fiery coach has joked this season that he’s been close to picking one up as he’s jawed with officials and lingered outside the coaching box.

He was whistled for arguing just under four minutes into the second half.

Afterward, Harrar appeared to grin behind the mask he wore into the postgame media room when asked if Shrewsberry’s temper fired Penn State up.

“Gritty, not pretty is what’s going to win games in the Big Ten,” Harrar said.

Izzo has watched Shrewsberry's squad closely all season. The Michigan State coach, in his 27th season in East Lansing, had some nice words for Shrewsberry before the anthem.

“I told him I was proud of him,” Izzo said. “I told him, ‘You could've won about four games and good coaches just keep on banging' and he did. He'll be the right coach for this place.”

Michigan State: The Spartans continue to play stingy defense. They entered the game holding opponents to just 40.4% shooting, but couldn’t keep Penn State under wraps down the stretch.

Penn State: The Nittany Lions just ended a tough streak in which they played five of their last seven on the road. Tuesday’s game started another trip in which they’ll play three games in six days.