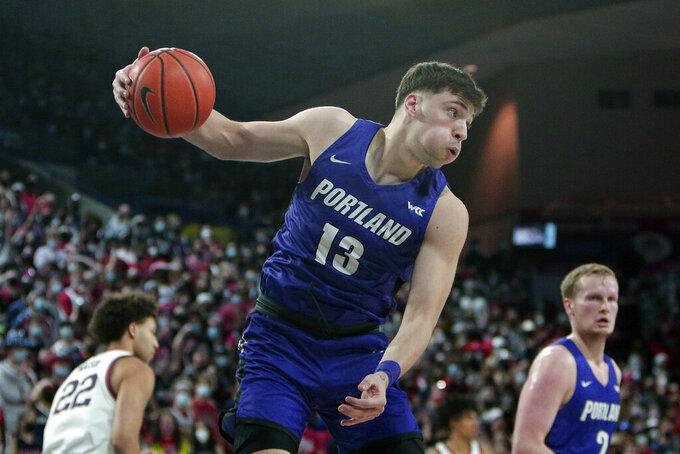 Drew Timme had 16 points and 10 rebounds, while Anton Watson also scored 16 for Gonzaga (17-2, 6-0 West Coast), which won its 64th consecutive home game, longest streak in the nation. Chet Holmgren added 12 points and 11 rebounds for the Zags and Julian Strawther scored 14.

Mike Meadows scored 19 points and Tyler Robertson 17 for rejuvenated Portland (11-10, 2-4), which is enjoying its best season in years under new coach Shantay Legans. The Pilots were hurt by 36% shooting.

Gonzaga made 18 of 41 3-pointers, and took the shots because that's what Portland was giving them, coach Mark Few said.

“It was them just not guarding us on the 3 line,” Few said. “They were readily available. They picked their poison, I guess, and chose not to guard us. This is a good shooting team. At the end of the day, we had 104 points. It's all good, just different.”

Watson said it appeared Portland was trying to trip up the Zags by leaving the perimeter open.

“It's kind of weird to play against that,” Watson said.

Gonzaga opened the game with five 3-point baskets in just over four minutes of play to take a quick 17-9 lead.

Watson's 3-pointer at the buzzer gave Gonzaga a 48-28 lead at halftime. Watson led all scorers at the half with 14 points off the bench, sinking all five of his field goal attempts.

Legans said his team played hard and didn't back down.

“I felt we were solid defensively for a bit, but then had a stretch where we couldn't stop them,” Legans said.

This is the only time the teams will play this year, and Legans said it was important to his players to see they belonged on the same court as Gonzaga.

“They can play against anyone,” Legans said of his team.

There were several technical fouls in the game because of rough play. “There was a lot of hard fouling going on, but for the most part we kept out of the fray,” Few said.

“I just think they wanted to bring all they have,” Watson said. “It shouldn't be chippy like that, but sometimes it is.”

A small group of protesters gathered outside the McCarthey Athletic Center before the game to complain about Gonzaga alum and NBA Hall of Famer John Stockton having his season tickets revoked because he refuses to wear a mask in the arena.

“Stockton is a Legend! NO Mask!” one sign read.

The Zags will probably stay at No. 2 despite two solid wins over conference foes.

Portland: The Pilots have lost 14 straight to the Zags, dating to their last win in 2014 ... Portland went 41 days between home games before beating Pacific last Thursday ... Portland's 11 wins so far are the most since the 2015-16 season.

Gonzaga: The Bulldogs have won 27 straight conference games, dating to a loss at BYU in 2020 ... Gonzaga leads the nation in scoring at 90.1 points per game ... This was the fourth time in the past six games the Zags scored at least 100 points.