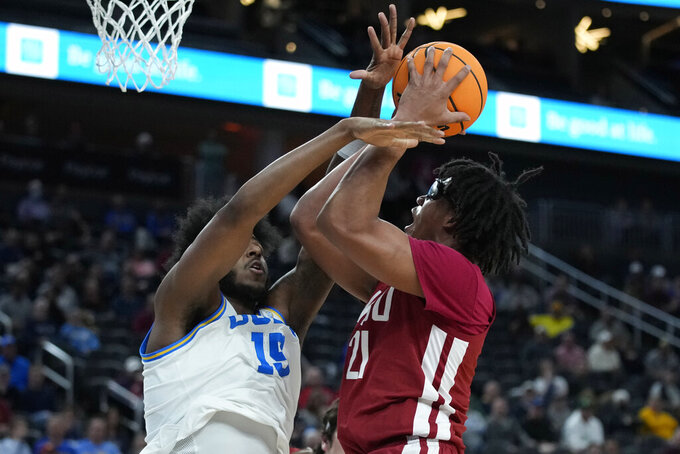 UCLA's Myles Johnson (15) guards Washington State's Dishon Jackson (21) during the first half of an NCAA college basketball game in the quarterfinal round of the Pac-12 tournament Thursday, March 10, 2022, in Las Vegas. (AP Photo/John Locher)

LAS VEGAS (AP) — UCLA sputtered through the start of its Pac-12 quarterfinal game, shots clanging, passes off the mark.

Bernard scored 10 of his 19 points during a key first-half run and Jacquez had 17 of his 23 in the second, lifting No. 13 UCLA to a 75-65 win over Washington State on Thursday night.

“Obviously, these two guys both got it going.” UCLA coach Mick Cronin said. “We were stuck in the mud a little bit, and Jules made some big shots, got our energy level up.”

The second-seeded Bruins (24-6) got off to a slow start offensively, but shut down the Cougars until they could find a rhythm. Once UCLA did, it went on a 19-2 run to build a 12-point halftime lead and didn't let up.

The Bruins move into Friday's semifinals, where they'll play No. 21 USC.

“We started to get deflections and get out in transition,” Bernard said. “I feel like once we get easy buckets in transition, that gets our juices flowing.”

Seventh-seeded Washington State (19-14) struggled against UCLA's pressure during a lengthy first-half offensive funk. The Cougars shot better in the second half, but were unable to make up any ground as the Bruins continued to make shots.

Andrej Jakimovski had 15 points and Tyrell Roberts 14 to lead Washington State, which was playing in the conference tourney quarterfinals for the first time since 2011.

“We came out with a good energy, got ourselves a lead early in the first quarter of the game,” Washington State coach Kyle Smith said. “We stalled out a little bit and they kind of separated. I think we could have made that more competitive.”

UCLA blew out Washington State 76-56 in the teams' lone meeting during the regular season, the Cougars' most lopsided loss of the year.

Washington State forced numerous shots with the shot clock winding down in the first, and had a stretch of 8 1/2 minutes without a field goal. The Cougars shot 9 of 27 in the first half.

In the second half, Washington State made five of its first seven shots — and fell further behind. UCLA hit seven of nine shots during one stretch to push the lead to 57-42 and Jaquez helped keep the Cougars at bay.

“They’re an experienced team, so they’re going to hit back,” Roberts said. “We just weren’t able weather that storm.”

Washington State: An awful offensive stretch in the first half put the Cougars in too deep a hole, even as the shots began falling in the second.

UCLA: Relied on its defense while its offense labored. Once the offense caught up, the Bruins rolled into the semifinals.

UCLA controlled the boards after its slow start. The Bruins had a 40-25 rebounding advantage overall and scored 17 second-chance points on 12 offensive rebounds.

Washington State: Awaits word on a possible invite to a second-tier postseason tournament.