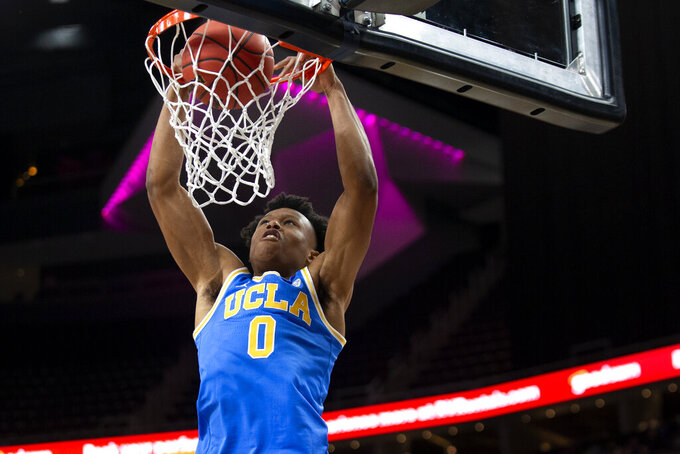 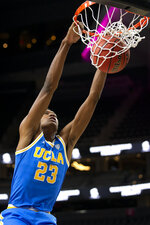 LAS VEGAS (AP) — No. 2 UCLA won the game on the scoreboard. Mick Cronin thought it was a loss.

With a heavyweight rematch waiting on the Las Vegas Strip, the Bruins' coach didn't think he got the full 40-minute effort he hoped for from his group.

But UCLA won its fifth straight game to open the season with a 75-62 win against Bellarmine on Monday Night in the Empire Classic, setting the stage for Tuesday's top-two showdown with No. 1 Gonzaga in a rematch of last season’s Final Four.

Gonzaga won 93-90 in overtime on a buzzer-beater from Jalen Suggs, who was the No. 5 overall pick in this year's NBA Draft by the Orlando Magic.

“The things I care about — hustle, attitude, effort, execution, the things that will get you wins when they really count — to me matter more than any category,” Cronin said. “So it's a credit to (Bellarmine) coach (Scott) Davenport.”

Peyton Watson had a game-high 19 points in 20 minutes off the bench, and Johnny Juzang added 13 for the Bruins (5-0).

UCLA gets a shot at revenge. Are the Bruins ready?

“No,” Cronin said. “Absolutely not. The challenge, for me, is us maintaining who we are. If we're just going to be a great team and make shots, we're in deep trouble."

Playing in its first game in four days, UCLA came out missing eight of its first 10 shots. The Bruins' defense responded, forcing Bellarmine to a 3 of 13 start in the first 11 minutes. UCLA went on a 19-2 run with Watson, the freshman from Long Beach, California, atoning for nine of those points

Watson shot 9 of 12 for the game and had four rebounds, easily outpacing his 3.3 points average through four games this season.

“Just a great week of practice, a great week of preparation,” Watson said. “The guys just told me to be patient, play my game, don't think about it too much, just come out and play my hardest. That's what I put a lot of emphasis on, just coming out, giving it my all and helping the team win.”

Bellarmine (0-5) lost in double digits for the fourth time in five games and is coming off consecutive losses against the nation’s top two teams. The Knights lost 92-50 at Gonzaga on Friday.

Dylan Penn led Bellarmine with 19 points and seven rebounds, while CJ Fleming had 12 points and made two 3-pointers.

The Bruins won the rebounding battle 36-27, but it was the offensive rebounding that made the difference.

UCLA had a 15-5 edge on the offensive glass with eight of them from center Myles Johnson. Five of them came in the second half.

The Bruins had three straight offensive rebounds on one possession that ended with Singletary's layup to push the UCLA lead to 54-32 with 14:14 remaining. UCLA had 24 offensive rebounds in Wednesday's 98-63 win over North Florida.

UCLA: The gap in talent was evident with the Bruins despite their shooting struggles, and the defense showed why. UCLA held the Knights to 35.7% in the first half and 1 of 10 from behind the arc, but only 36-25. The Bruins started the second half on a 16-4 run to pull away.

Bellarmine: The “no-dribble” offense has been tested early this season. The Knights have played three teams who made the NCAA Tournament last season (UCLA, Gonzaga, No. 3 Purdue) and one that played in the NIT (Saint Mary’s).

UCLA: Will face No. 1 Gonzaga on Tuesday night.