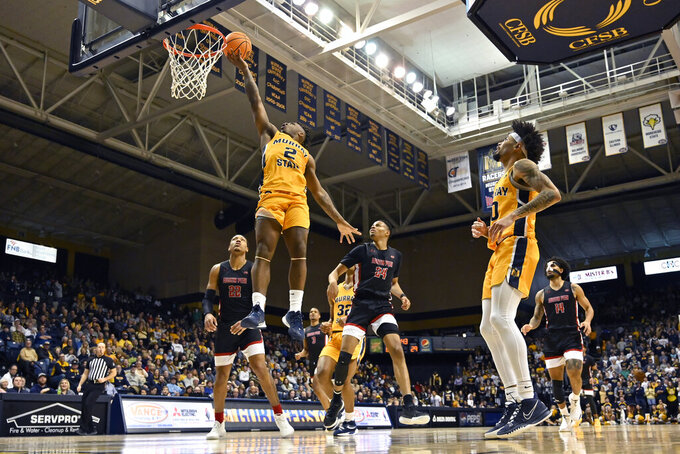 MURRAY, Ky. (AP) — KJ Williams had 25 points and seven rebounds to lead No. 21 Murray State to a 91-56 victory over Austin Peay on Thursday night.

Tevin Brown scored 13 points, DJ Burns, Justice Hill and DaQuan Smith each had 11 and Trae Hannibal added 10 for the Racers (25-2, 15-0 Ohio Valley Conference), who won their 15th straight game and are one of three teams in the country unbeaten in conference play.

“Our guys compete on that defensive end of the floor every night,” MSU coach Matt McMahon said. “So that gives you a chance to win. But now you combine it with the offensive efficiency tonight.

“There are only six teams in the country in both offensive and defensive efficiency, with us being one of them.”

The Governors (10-15, 6-9) were led by freshman forward Elijah Hutchins-Everett’s 12 points and four rebounds on 4-for-8 shooting from the floor and 4-of-5 shooting from the line. Caleb Stone-Carrawell, who recently returned from injury, finished with 11 points.

Murray State seized control with an early 23-2 run, powered by 11 points from Williams.

“It was a game that was on television,” Williams said. “We just wanted to go out and send a message that we can play as a team, and we’ve got guys that can score anywhere on the court, one through five.”

The Governors didn’t score their second basket until the 10:28 mark of the first half, ending a 7:34 scoring drought.

“Coming off of every screen, Coach Mac just told us to get downhill ... .and coming off of screens, especially with Tevin Brown — who’s our glue guy — they were going to pressure him mainly,” Hannibal said. “It was just executing, knowing our reads and things like that, and just working together.”

This was the largest-attended home game of Murray State’s season to this point at 6,217.

Murray State won the defensive glass 28-12, outscored the Governors in the paint 50-12 and earned a 22-0 edge in fast-break points. The Racers moved to No. 23 in KenPom rankings, and remain top 25 in NET rankings.

Fresh off of a 44-11-5 performance for the Memphis Grizzlies, third-year NBA point guard and first-year NBA All-Star Ja Morant was with his family and in attendance of the game.

At a timeout in the first half, chants of “MVP! MVP!” rang out across the arena.

With the victory, No. 21 Murray State earned, at the very least, a double-bye into the 2022 Ohio Valley Conference semifinals. The tournament will take place the first weekend of March at the Ford Center in Evansville, Indiana.

Meanwhile, in what’s been contentious conference play, Austin Peay held the third-longest winning streak in the league coming into Thursday. With the loss, the Governors continue to push for the No. 4 seed in the league, which carries a single-bye into the quarterfinals.

Murray State: At UT Martin for what will be the final visit to the facility as an Ohio Valley Conference matchup. After 74 years and as founding families of the OVC, the Racers accepted a bid to the Missouri Valley Conference, and will become members effective summer 2022.

Austin Peay: Bound for the Atlantic Sun this summer, will host Tennessee Tech on Saturday.