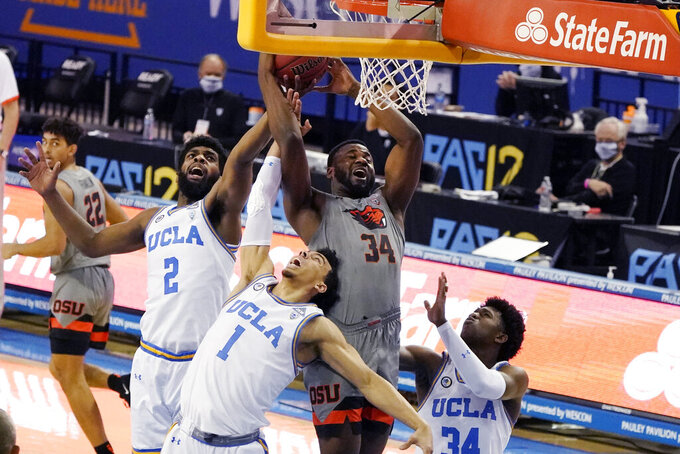 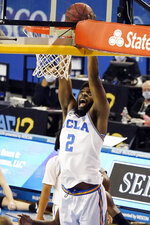 LOS ANGELES (AP) — UCLA keeps on winning, even while its margin gets tighter and tighter.

Cody Riley had 16 points and 10 rebounds, and the 23rd-ranked Bruins outlasted pesky Oregon State for a 57-52 victory on Saturday night.

It was UCLA’s third straight game that came down to the final three minutes. They are 2-1 in that stretch, topping California by four points and losing to Stanford by one last week.

“It was another one of those games you got to grind out,” Riley said. “We didn’t panic. The game got close and we could have easily done that.”

“We had to be better as a team,” Riley said. “The team came with the fire.”

Riley's jumper capped a 6-0 spurt and gave UCLA its first double-digit lead of the game with just under four minutes remaining.

They responded with eight straight points to trail 52-49. The Bruins had Jarod Lucas double-teamed in the corner, but he got the ball out to Warith Alatishe, who came flying through the lane for a one-handed dunk to cap the spurt.

“I loved that our guys fought and they never gave in,” Beavers coach Wayne Tinkle said in a radio interview after the game.

Clinging to a 53-50 lead, Riley missed a 3-pointer. After a timeout, OSU's Ethan Thompson stumbled while making slight contact with Jules Bernard and lost the ball out of bounds with eight seconds to go.

The Beavers were forced to foul Tyger Campbell, who made both for a 55-50 lead.

Thompson's layup drew the Beavers within three, but they again fouled Campbell, who made both to close out the victory.

“We know what to do when we get in those situations,” said Bruins guard Jaime Jaquez Jr., who had nine points and eight rebounds. “We know how to play our defense and as far as offense, slow the game down and get the shot that we want to get.”

Thompson led the Beavers with 16 points, their only double-figure scorer.

Oregon State held UCLA to 33% percent shooting, but the Beavers committed 15 turnovers and got to the free-throw line just seven times. The Bruins were 17 of 23 from the line, with Riley going 6 for 10.

Oregon State: The Beavers got swept in Los Angeles, with their three-game win streak ending at Southern California. But they have upcoming games against teams with losing records, and some wins would quickly move them up in the league standings. They are one of seven Pac-12 teams with four or fewer wins.

UCLA: The Bruins have a week to prepare for their rivalry game at second-place USC. After that, four of their final seven scheduled regular-season games are against sub.-500 teams. They have yet to play Oregon this season, with all three scheduled meetings postponed because of the Ducks' COVID-19 issues, although it's likely at least some of those games will be made up.

Bernard, one of the Bruins' starting guards, went down with a loud thud near his team’s basket with eight minutes left in the first half. He draped his shoulders over two staff members and limped off the court. He bruised his right knee and didn’t start the second half, but came in late and made a couple of defensive plays.

“I thought he blew his elbow out the way he went down. He landed without bracing himself at all,” UCLA coach Mick Cronin said. “I'm sure he'll be pretty sore tomorrow.”

UCLA reserve David Singleton spent several minutes shooting by himself after the victory, making 3 after 3 from the right corner. In the game, he hit three 3-pointers for nine points and had five rebounds and two assists with no turnovers in 31 minutes. “We needed that with Jules out,” Cronin said.