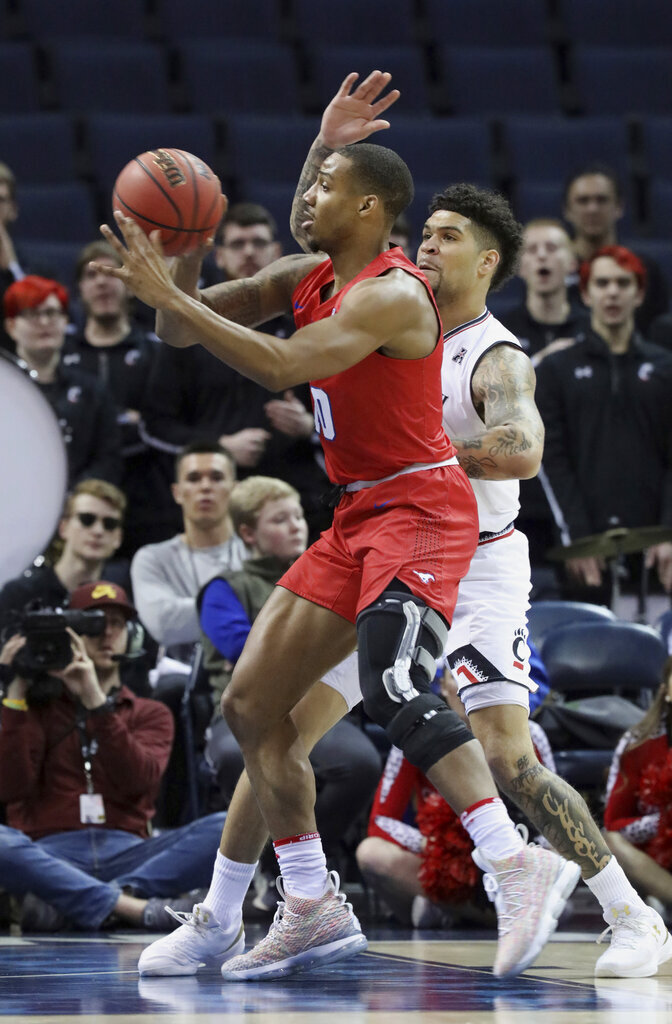 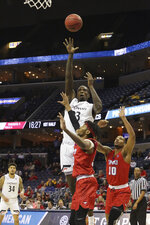 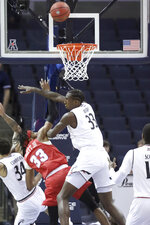 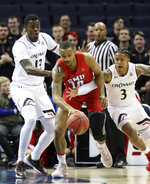 MEMPHIS, Tenn. (AP) — When it came to the final minutes of a close game, No. 24 Cincinnati had enough energy to finally pull away and advance to the American Athletic Conference semifinals

Jarron Cumberland had two late three-point plays and finished with 26 points to help the Bearcats beat SMU 82-74 on Friday night. Cincinnati (26-6) will face the Temple-Wichita State winner in the semifinals.

Tied at 66 with 4:53 remaining, the Bearcats steadily pulled away with Cumberland taking over. His three-point plays came with 3:46 remaining and 2:21. The Mustangs missed shots and were left to foul in hopes of cutting into the lead.

Instead, the Bearcats stretched the margin to 10 at least three times in the final minute as they made 7 of 8 free throws during one stretch.

"We had to win with offense," Cincinnati coach Mick Cronin said. "Our passing was excellent, 15 assists to eight turnovers. ... And then, obviously, Jarron does a great job of closing the game out. He's been doing that all year for us.'

"It feels great when it goes in," Jenifer said of this shooting night. "I get on myself for missing shots, and today it was going in. Today was my day. Perfect days don't happen like that. They don't happen often."

The Mustangs, coming off a 74-65 victory over Tulsa on Thursday, shot 51.7 percent, while Cincinnati made 50.8 percent of its shots.

Mustang coach Tim Jankovich said the difference at the end was the Bearcats had more energy. Four of SMU's five starters played more than 33 minutes in a tightly-fought emotional game, and there wasn't enough to finish.

"I give them a lot of credit, they hit a lot of shots that they normally wouldn't make," Jankovich said about Cincinnati, later adding: "I think we wore down. They bring waves, particularly their front line, they bring guys in waves. They keep them fresh. We're leaving our guys out there an awful long time. ... We couldn't finish. Not as an excuse, but I know that we've got some guys on fumes out there."

For the Bearcats, despite the game being close down the stretch, there was no reason to panic, Cumberland said. Last season's returning players have stepped up and Cincinnati has used that experience to survive many tight games. Ten of the Bearcats wins in the conference were by single digits.

"Coach told us we have to keep our calm," Cumberland said. "We have to stay calm and just do what we had to do to win game. Because at the end of the - at the final score - that's the only thing that matters."

SMU: The Mustangs fought valiantly to stay with the Bearcats and did a good job of it until the final minutes. The game had seven ties and five lead changes. Whitt, who had the responsibility of guarding Cumberland, did an admirable job and added an offensive punch, making 12 of 19 shots, while also grabbing seven rebounds.

CINCINNATI: Jenifer's perfect shooting night kept the Bearcats seemingly in control despite the fight from SMU. The Bearcats outrebounded SMU 36-28, and that included 16 off the offensive glass, leading to 17 second-chance points.