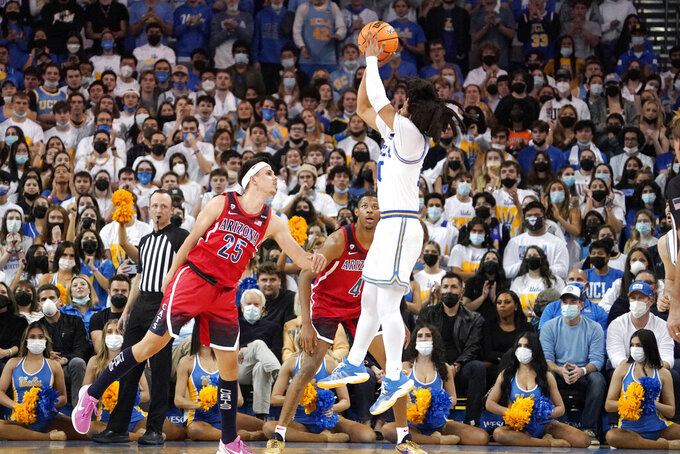 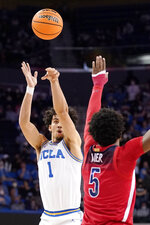 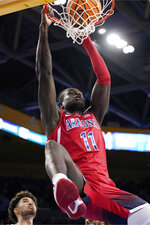 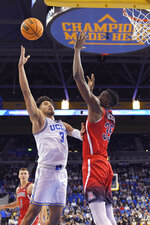 A higher-ranked rival. A nationally televised game. First place in the Pac-12 on the line.

“This group of guys, we love these type of games, we love these big games and big matchups," said Johnny Juzang, the star of UCLA's run to the Final Four last season. “Everybody battled.”

Juzang and Jules Bernard scored 15 points each and the Bruins played gritty defense to beat No. 3 Arizona 75-59 on Tuesday night, handing the Wildcats their first loss in league play.

“To come out and prove that we have the energy, fight and grit to beat a team like Arizona, it was telling,” Bernard said.

Bennedict Mathurin scored 10 of his 16 points in the second half and grabbed 10 rebounds for the Wildcats (16-2, 6-1), who had their five-game winning streak snapped. Christian Koloko added 11 points and seven rebounds, highlighted by six dunks from the 7-foot-1 center.

“We knew they were going to try to pick on some matchups, and they did it, and it worked out for them,” Arizona coach Tommy Lloyd said. “We'll see how it works out next time.”

Jaime Jaquez Jr. scored all 10 of his points in the second half for the Bruins, including eight during the Wildcats' spurt. UCLA went cold for three minutes before getting back-to-back 3-pointers from David Singleton and Bernard that pushed the lead to 14.

“It's just been something we’ve been impressing all week: trying to take our team and our game to the next level, find that intensity that we have and put it out on the floor,” Jaquez said.

When the Bruins weren't scoring, they were defending, tipping balls out of the Wildcats' reach, throwing their bodies around inside and blocking shots. They held Arizona to a season low in points.

“By far our most spirited 40 minutes of the year,” UCLA coach Mick Cronin said. “Effort matters. Our effort was awesome.”

UCLA fans chanted “Overrated!” at the Wildcats, who had their share of fans on hand at Pauley Pavilion. Arizona was the highest-ranked opponent to play at UCLA since No. 1 Kentucky on Dec. 3, 2015.

Both teams came out firing. Neither missed a 3-pointer in the first 6 1/2 minutes, with Arizona making its first four and UCLA hitting its first three.

But the Wildcats missed their next 11 3-point attempts and their shooting slumped to 35% in the half. The Bruins ran off 12 points in a row to erase a four-point deficit. They shot 53% in the half and led by 15 before settling for a 40-29 advantage at the break.

The arena was fully reopened to fans after being closed to all but families and friends of the players and coaching staff since Jan. 6 because of surging COVID-19 cases.

Arizona: The Wildcats had been off to their best start since going 21-0 in 2013-14. They had dominated their previous three league road games, winning by at least 25 points. But their 31% shooting didn't help, along with 14 turnovers. They lost their sixth in a row to UCLA and will need a short memory because the Bruins visit Tucson next week.

UCLA: The Bruins improved to 8-1 at home, buoyed by the electric atmosphere that recalled games between the rivals from years past. They won without Jaylen Clark, who is averaging 18 minutes per game, after he got hit in the face at practice Monday and was experiencing concussion-like symptoms.

Pelle Larsson had 10 points and five rebounds for Arizona starting in place of Tubelis, who sprained his left ankle at Stanford last week and didn't play against California. Tubelis finished with eight points and six rebounds in 14 minutes.

"I haven’t seen Jaime jump that high in three years. He had three blocked shots, are you kidding me?” — Cronin.

UCLA: Hosts California on Thursday in the second of three straight home games. The Bruins won the first matchup by eight points on Jan. 8.