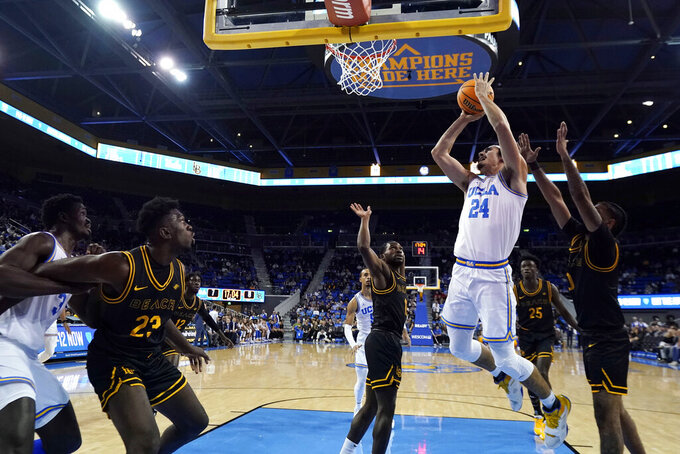 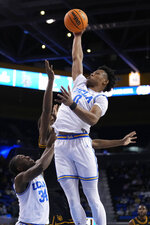 Jaylen Clark had 16 points and David Singleton added 14 points and a career high nine rebounds to help the Bruins (2-0) win their third game over the Beach in two seasons after the teams scheduled a second contest in January to make up for games lost to COVID cancellations.

“If you would have told me at any point Dave Singleton was going to lead my team in rebounding one day with nine, I would have lost that bet,” UCLA coach Mick Cronin said. “Just a great kid with tremendous character.”

UCLA freshman Amari Bailey also had 14 points in his second career game on 7-for-15 shooting from the field. Jaime Jaquez Jr. had 12 points and eight rebounds for the Bruins.

Lassina Traore had 14 points for Long Beach State (1-1), while Joel Murray and Jadon Jones each added 10. The Beach gave up 25 points on 17 turnovers.

“In a game like that, you're going to have to take care of the ball and make them earn their points and we gave them way too many points off of our offense,” Long Beach State coach Dan Monson said. “They overwhelmed us with that. They had half of their points in the first half off things we couldn't handle.”

After a sluggish start, UCLA was mostly at full speed, making 47.6 percent of its shots from the field and 36.0 percent from distance.

Bailey gave the Bruins their first 20-point lead on a jumper with 5:06 remaining in the first half to go up 39-18.

Campbell scored six points in an 9-2 run by UCLA just past the midway point of the second half for a 78-49 advantage with 7:58 to play.

Campbell reached his 1,000th point on a 3-pointer with 14:17 remaining in the first half. The point guard became the 60th player in UCLA history to hit the scoring milestone.

“It was a cool moment and I saw that I joined (the top) 60 players and that means a lot with all the hard work I put in here,” Campbell said. “I don't play for those things, to get 1,000 points, but obviously it's a cool accolade to have.”

Adem Bona, another of UCLA's heralded freshman class, made his debut, starting and scoring eight points on 4-for-4 shooting with eight rebounds.

“When I was here my freshman year, we were a veteran team so I didn't necessarily get the game opportunities and things the young guys are getting now," Clark said. “We need them to produce and be ready.”

UCLA is now 20-1 in the all-time series against Long Beach State.

Long Beach State: After playing just one of their first seven games at home last season, the Beach will head home for two games before heading to Nassau, Bahamas, for the first of three games starting with Oakland on Nov. 25. Long Beach State started 2-6 last season before making the NIT field.

UCLA: The easy victory afforded the Bruins to give quality minutes to heralded freshmen like Bailey, Bona and Dylan Andrews. UCLA has just one more game remaining before heading to Las Vegas to face Illinois and then either Baylor or Virginia. Bona was held out of the Bruins’ opener Monday because of an amateurism issue.

UCLA: Will play host to Norfolk State on Monday.