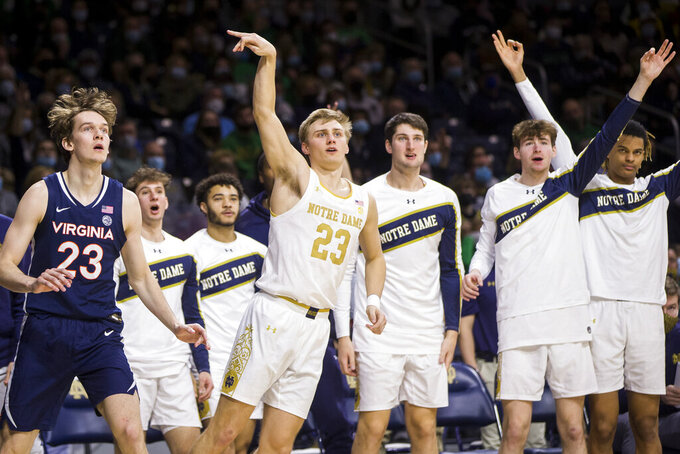 Goodwin had 13 points after halftime and Laszewski scored 12 to help the Fighting Irish (14-6, 7-2 Atlantic Coast Conference) end a six-game losing streak to the Cavaliers (12-9, 6-5).

Freshman Blake Wesley scored the first eight points for Notre Dame. He hit two 3-pointers and added two free throws to give the Irish an 8-7 lead 4:20 into the game. Notre Dame led the rest of the half as Paul Atkinson Jr. scored 12 of Notre Dame's next 26 points and the Irish took a 34-27 lead into intermission.

Goodwin's 3-pointer gave Notre Dame its largest lead at 52-37 with 11:50 remaining. Virginia battled back to within 67-65 on a 3-pointer by Kihei Clark with 8 seconds remaining. Prentiss hit his two clutch free throws and Notre Dame prevailed for its fourth straight win and 10th in its last 11 games.

Wesley and Atkinson finished with 14 points each for the Irish. Atkinson added nine rebounds and Wesley had seven assists. Goodwin, who has scored in double figures in all 20 games, is one of two Division I players shooting 50% overall, 40% from beyond the arc, 90% at the free-throw line and averaging at least 15 points.

Jayden Gardner scored 22 on 10-of-17 shooting and grabbed 10 rebounds to pace the Cavaliers. It was his fifth double-double of the season. Reece Beekman had 13 points and Clark finished with 12 points and six assists. Francisco Caffaro contributed 11 points and 12 boards for the first double-double of his career.