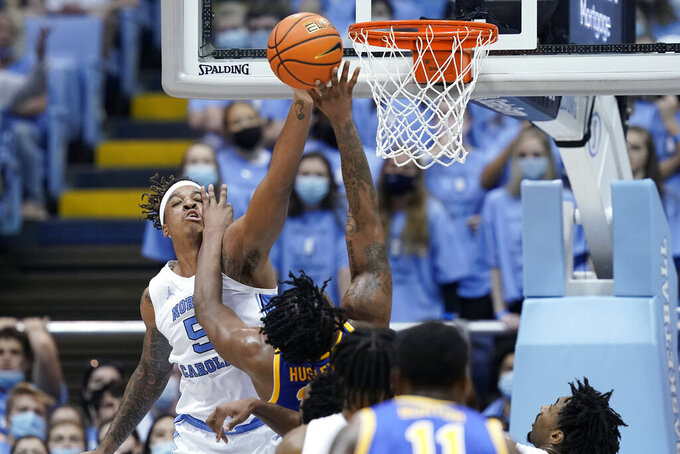 Caleb Love scored 15 of his 19 points in the final 5:11 for the Tar Heels (18-8, 10-5). Brady Manek added 12 points and 10 rebounds and Kerwin Walton and Leaky Black had 11 points each. Leading scorer and rebounder Armando Bacot picked his fourth foul with eight minutes to go and remained on the bench finishing with seven points and eight rebounds.

In the Tar Heels' previous game, UNC outscored Florida State 62-24 in the first half of a 20-point win. But Wednesday, it was the Panthers taking off to a 40-23 lead at halftime after shooting 60%, over 30% better than UNC.

When Bacot — who leads the ACC with 19 double-doubles this season — picked up his fourth foul, the Tar Heels were trailing by 19. They rallied without him as Love scored 13 straight UNC points and assisted a Manek basket to pull within 69-63 with 1:50 to go. But they wouldn't get closer with Hugley scoring five points down the stretch.

Pitt beat UNC for the third time in their last four meetings and won for the second straight time at Chapel Hill.