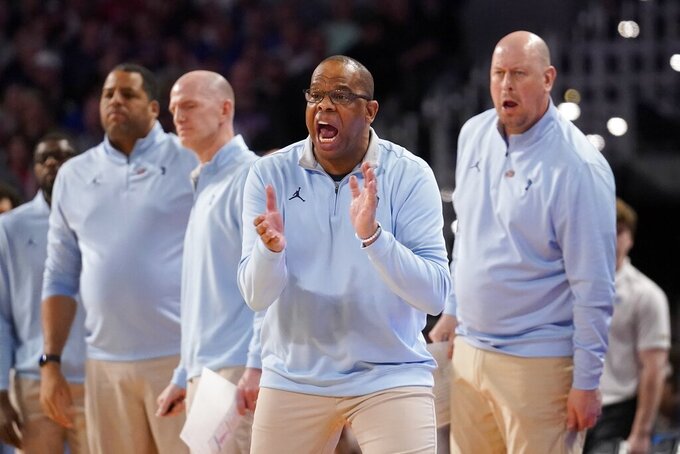 That’s why the sophomore is doing everything possible to stay ready. Extra naps. Making sure to get in an ice bath. Working to calm his mind and reset.

Whatever it takes to be ready for major minutes.

The Tar Heels have surged into the NCAA Tournament’s Sweet 16 by leaning heavily on their starters for long stretches on the court – if they come out at all. The minutes are piling up entering Friday’s matchup with UCLA in the East Region semifinals in Philadelphia. Yet that hasn’t stopped the eighth-seeded Tar Heels from pulling off some huge March victories under first-year coach Hubert Davis.

“The guys that are playing high minutes during the game, it’s really (about) how the game is going,” Davis said Tuesday. “If a certain five is in there and it’s working, whether defensively or offensive execution, I like to run with that.“

Davis – a former UNC player under Dean Smith and a 12-year NBA veteran – has seemingly handed the keys to his starting five of Davis, Caleb Love, Brady Manek, Armando Bacot and Leaky Black with reserves only seeing a sprinkling of minutes.

Consider it a sign of Davis’ confidence and trust in the quintet with their ability to play through both physical fatigue and the mental strain – and play well enough to keep winning.

“I guess it’s something we as a group have gotten accustomed to,” said the 6-foot-10 Bacot, the nation’s third-leading rebounder who has set the program’s single-season record for double-doubles. “We’ve been playing such high minutes all year, so we kind of know how to play hard but also pace ourselves in some situations. I would say all of us, we like being on the court. I’d rather be on the court than on the bench, so I don’t have a problem with it.”

It certainly hasn’t hurt the Tar Heels (26-9) that there's a bit of help baked into the NCAA game schedule. Halftime has gone from 15 minutes in the regular season to 20 for the tournament, while the first called timeout of both halves becomes a full timeout compared to solely the second half in the regular season.

That adds a few extra rest opportunities, even fleeting, to help the Tar Heels’ legs feel a little less rubbery.

Then again, it wasn’t that long ago that the Tar Heels were uncertain to even be here at all, or would have the fortitude to pull of something like this.

North Carolina didn’t have a resume-topping win until mid-February, and they had been blown out of just about every measuring-stick game against top-tier competition to raise serious questions about their competitive edge.

Things sure have changed since.

Each of the five starters has logged 40 minutes or more in at least one game in the past month; in the last eight games alone, the quintet has combined to play 40 minutes 10 times after accounting for just three through the first 27 games.

Some of that is necessity. The roster shrunk when Marquette transfer Dawson Garcia left the team due to family concerns and guard Anthony Harris was ruled out for the season due to unspecified reason. But Davis decided to ride his five best players while sprinkling in reserves Dontrez Styles, Puff Johnson, Justin McKoy or Kerwin Walton here and there.

Asked about those heavy minutes by a reporter, his coach was quick with a response.

“Would you take him out?” Hubert Davis quipped.

The 94-81 win against the Blue Devils on March 5 illustrated the upside to Davis’ thinking, and perhaps the moment the Tar Heels’ toughness and resilience reached full bloom. Davis and Manek played all 40 minutes, Love and Black played 38, and the starting five played a substitution-free second half.

That group went on to score 55 points and shot 59% after halftime in a fearless staring down of one of college basketball’s toughest environments.

The only thing that stopped the Tar Heels from doing something similar against Baylor came when Manek – an Oklahoma transfer who scored 54 points in the first two NCAA games – was ejected on a flagrant foul for throwing an elbow followed by Love fouling out.

The 25-point lead vanished once Manek departed, and the Tar Heels entered an overtime reeling with Styles and McKoy pressed into larger roles. But Styles responded with a season-high nine points and a 3-pointer in OT that helped the Tar Heels hang on.

Now they have another chance to trust their ironmen.

“The starting five, they’ve done unbelievable,” Manek said. "I actually talked to Leaky the other day: I wouldn’t say we’re in the best shape of our life. I just think we’re playing a lot, and it’s been a lot of fun.”