Tech has foundation for future after reaching national final 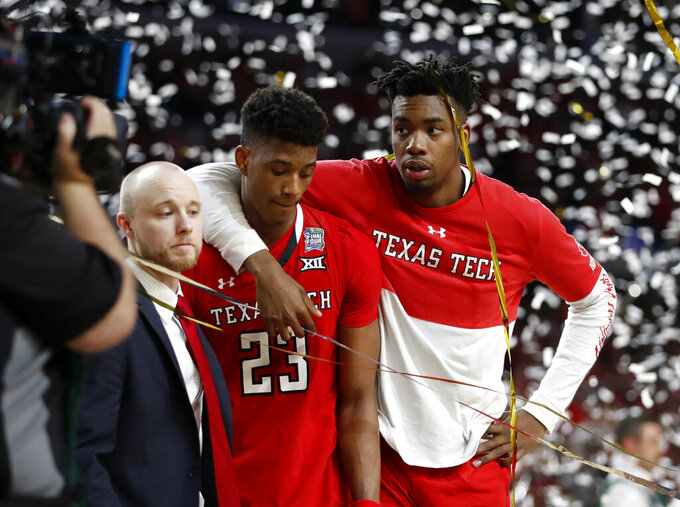 Texas Tech's Jarrett Culver (23) and Brandone Francis react after the team's 85-77 loss to Virginia in the overtime in the championship of the Final Four NCAA college basketball tournament, Monday, April 8, 2019, in Minneapolis. (AP Photo/Jeff Roberson) 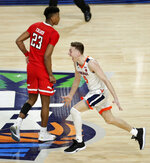 MINNEAPOLIS (AP) — Brandone Francis plopped down in front of the Texas Tech locker room stalls where Matt Mooney and Tariq Owens were seated, their eyes red and wet as they clasped hands in consolation and solidarity while Virginia was celebrating on the court.

Three of the team's four seniors were still trying to process the fresh agony of losing in overtime of the national championship game with the life-changing and program-lifting season the Red Raiders (31-7) had just finished. In this rawest of moments they experienced, the sadness was too strong to push aside .

"It's so hard to come up short, man," Mooney said in the softest of his voices, staring straight down at the floor after Texas Tech lost 85-77 in Minneapolis.

Mooney, the sharp-shooting guard with the close-shorn haircut who was the star of the win over Michigan State in the semifinals on Saturday, landed in Lubbock with coach Chris Beard for his final year of college.

The two-time transfer, who started at Air Force and then switched to South Dakota, found a place to belong, however briefly, with Beard and his like-minded collection of underdogs and afterthoughts.

Naturally, Mooney was taking the loss as hard as anyone as Monday night crept toward Tuesday morning deep inside U.S. Bank Stadium.

"At the end of the day, we're brothers," he said. "We're family. We're always going to be family."

Beard, the Associated Press Coach of the Year award winner , worked his way through junior colleges, a semipro league, Division III, Division II and a mid-major before finally arriving at a power conference program with the Red Raiders three years ago.

Last season, he took them further than ever, where predecessors Gerald Myers, James Dickey, Bobby Knight, Pat Knight and Tubby Smith never went, to the school's first Elite Eight appearance. Though they went 27-10 and ultimately fell to eventual champion Villanova, the Red Raiders lost five of their top six scorers.

Jarrett Culver, a projected top 10 NBA draft pick, made major strides in his sophomore year. Mooney and Owens made major impacts and immediately meshed with their teammates, never an easy task for graduate transfers. Francis, who started his career at Florida, was a steely spark off the bench. Davide Moretti, a sophomore from Italy, was the team's second-leading scorer. Norense Odiase, the other senior in the rotation, helped hold down the middle.

Whatever the Red Raiders might have been missing on offense, they made up for with the defensive tenacity around which Beard has built this hard-nosed team in the styles of the Knights he once coached under.

By one metric, data expert Ken Pomeroy's points-per-100-possessions ranking, Texas Tech was not only the most efficient defensive team in the nation, but the best since that statistic was invented 17 years ago.

The Red Raiders, along with co-Big 12 champion Kansas State, ended a 14-season run by Kansas atop the conference.

Francis frustratingly declared "nobody remembers second place," but in the case of this Texas Tech team, that's not true, and not just for Red Raiders fans. Any regular follower of the NCAA Tournament will have no trouble recalling this run.

"These guys will go on to be great pros and fathers and husbands," Beard said. "Just never been more proud of a group."

Though Culver said he had not decided yet whether to turn pro, he's a good bet to be lottery bound, so Beard and his staff will have a lot to replace. The foundation has been built, though, and reaching the national title game will never hurt recruiting.

"Having years like this is just great for the program," Odiase said. "We know that this is a team that will be back next year because of Chris Beard and everything that he's about."

With Culver and Mooney struggling to score for much of Monday night, freshman guard Kyler Edwards filled in capably with 12 points, including a pair of 3-pointers. Moretti will be back, too.

Kansas lost 10 games for only the second time in 19 years, so the Big 12, which has only produced a national champion twice in the past 67 years with titles by the Jayhawks in 2008 and 1988, ought to be as wide open for the Red Raiders as ever.

"We've got new pieces coming in and we've got a little experience," Edwards said. "I feel like we're a good thing heading into next year."