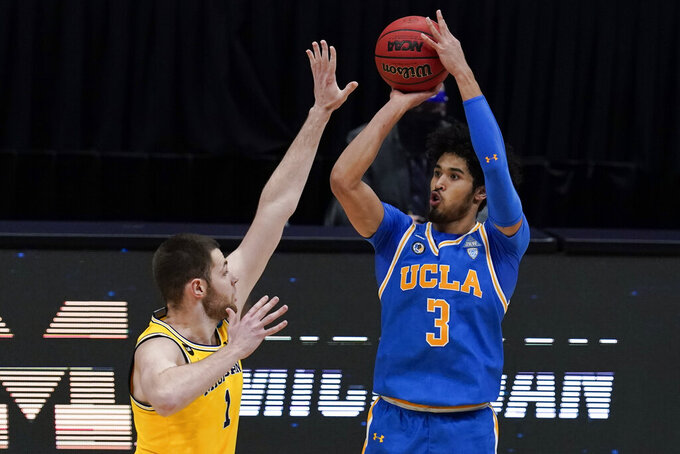 INDIANAPOLIS (AP) — Johnny Juzang's impact at UCLA has been immediate since he transferred from Kentucky, giving the Bruins the scorer and dynamic player they had been missing in recent years.

The junior guard is playing his best at just the right time, leading the Bruins into the Final Four for the first time since 2008.

Juzang also has had a much broader impact, even if it has been unintentional.

Projected to be the second Asian American NBA first-round pick, possibly in the lottery, he has become an inspiration for younger players at a time when hate crimes against Asian Americans are on the rise.

“It’s not something that’s on the top of my mind or really think about. I’m just Johnny,” said Juzang, whose mother is Vietnamese. “I will get messages or hear stories about how I inspire people, regardless of their heritage. Sometimes there are people of Asian decent. But just being able to inspire people is something that’s touching and inspires me and something I don’t take lightly.”

Juzang's older brother Christian played at Harvard and led the Saigon Heat to the 2020 championsh ip in the Vietnamese Basketball Association.

Christian was the top pick in the VBA draft, and the younger Juzang looks like he has an even brighter professional future. He has thrived on the court since transferring to Westwood. A former five-star recruit, the 6-foot-6 guard was a role player on a loaded Kentucky team, averaging 2.9 points and 1.9 assists in 28 games as a freshman.

Not long after the coronavirus pandemic shut down the season, Juzang announced he was transferring and later picked UCLA to be closer to his family in Tarzana, California.

Juzang missed the first four games of the 2020-21 season with a foot injury, but he is a big reason the Bruins were able to overcome senior Chris Smith's season-ending knee injury in early January.

Juzang was the Bruins' leading scorer at 15.5 points per game while shooting 34% from the 3-point arc and seemed to get better as the season progressed. He scored at least 20 points three times in the NCAA Tournament, including 28 against Michigan to clinch a spot in the Final Four.

And he's done it on an ankle that's been bothering him for weeks.

“He’s more of a scorer than a shooter and I think that’s what he got labeled at Kentucky,” UCLA coach Mick Cronin said. “I wanted him to get rid of that mindset. We really worked hard on his mid-range and him going to the basket. He’s grown immensely.”

Juzang's length and skill set have him projected as a possible NBA lottery pick. It will be history if he is.

Rex Walters, who's mother is Japanese, was a first-round NBA draft pick in 1993. Jeremy Lin was a standout at Harvard before his Linsanity days in the NBA and lengthy professional career.

Kihei Clark, who's Filipino American, made one of the biggest plays during Virginia's run to the 2019 championship and just completed his junior season.

Arizona State's Remy Martin had a stellar four-year career in the desert and Jordan Clarkson, who is also Filipino American, has a steady NBA career going after playing at Tulsa and Missouri.

Rui Hachimura of Gonzaga was a lottery pick, but he is a native of Japan. Yao Ming never played college basketball, going straight from the Chinese national team to the NBA.

Juzang is a rarity as an Asian American in college basketball with clear NBA potential.

“I think it’ll be a really significant moment and I think the more that it can just be felt where that is normal, I think is what can make it even more significant,” Miami Heat coach Erik Spoelstra, whose mother is Filipino, said without talking specifically about Juzang. “It doesn’t matter what your race is or what your background is. As long as you can hoop, then people can see you in that way.”

High draft pick or not, Juzang has been an inspiration for players, particularly young Asian Americans. Hate crimes against Asian Americans have spiked during the pandemic, as has the vitriol on social media and beyond toward people of Asian decent.

Juzang's success and UCLA's run into the Final Four has drawn positive reactions from Vietnam and all over the world.

“That’s always a good feeling to hear from people, but I wouldn’t say it’s on the forefront of my mind,” he said.

Maybe not, but it's helping — at least a little.