Wallace leads No. 19 Kentucky past Michigan 73-69 in London 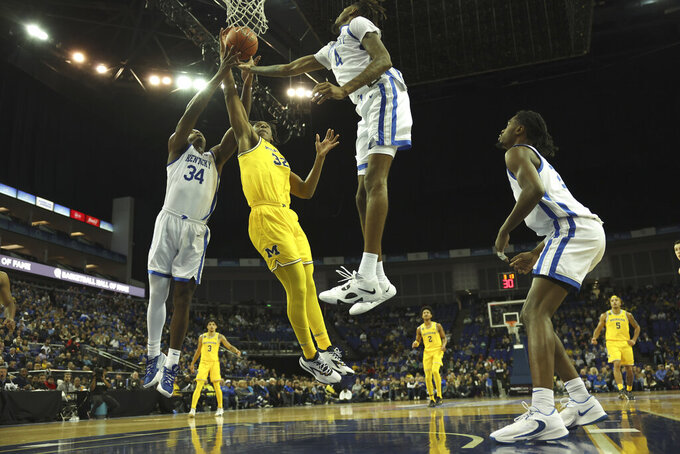 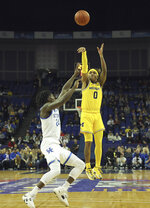 LONDON (AP) — John Calipari said Kentucky was lucky to beat Michigan in London after missing free throws down the stretch.

Cason Wallace had no trouble from behind the arc, hitting a key 3-pointer to help seal the 19th-ranked Wildcats' 73-69 win Sunday at the O2 Arena in a showcase of two marquee American college sports teams.

Kentucky was 10 of 20 from the line and figures to practice its foul shots plenty in the coming days. First, Calipari is hoping to get some shuteye.

“I haven't slept for three days. I’m up all night right now,” Kentucky's coach said after the first regular-season game in Europe for both teams. “I’m worried about our guys going back, but it was a great experience.”

Wallace scored 14 points and Oscar Tshiebwe had a double-double in front of 8,242 fans, who seemed to be the only ones in the British capital not preoccupied by England's 3-0 win over Senegal in the World Cup.

Wallace was 4 of 4 on 3-point shooting with his most important one giving the Wildcats (6-2) a five-point lead with 1:11 to play.

Tshiebwe, last season’s consensus national player of the year, scored 13 points and pulled down 14 rebounds amid foul trouble that kept him on the bench for an extended spell in the second half.

Howard picked up his second foul seven minutes into the game and sat on the bench for the rest of the half — and appeared to get a stern talking to from coach and dad Juwan Howard.

Michigan's coach credited the team trainers for getting Jett Howard ready to play. He said the freshman guard sustained an unspecified injury last week against Virginia.

“I didn’t expect for Jett to play, nor did Jett expect to play today,” Howard said. “He wanted to be out there and compete. He loved the fact that we were playing against a high-level opponent like Kentucky. Overall, we’re a better team no doubt when Jett’s on the floor."

Howard would not provide details: “He just had an injury.”

But after Sahvir Wheeler missed a free throw, Jett Howard's 3-pointer cut Kentucky's lead to four with six seconds left. Michigan fouled and Wallace missed two more free throws, but Howard was off target on a contested 3-point attempt to end the game.

“We got lucky here,” Calipari said. “We missed free throws again, which is what we did (in a loss) to Michigan State.”

The Basketball Hall of Hame London Showcase gave fans an up-close look at a head-to-head battle of big-name big men: Tshiebwe and Dickinson.

Both star big men had slow starts offensively. Dickinson's first points came off a layup near the midway point of the first half. Tshiebwe missed four shots in a row at one point before finding his groove.

The Congolese star picked up two fouls toward the end of the half. Tshiebwe went to the bench with 11 points and seven rebounds.

The game was originally scheduled for 2020 but was postponed because of the COVID-19 pandemic.

Kentucky earned its first win over a high-quality opponent — and its first victory away from Rupp Arena this season.

It was Michigan's second consecutive loss to a ranked opponent. The Wolverines lost 70-68 to No. 3 Virginia last Tuesday in Ann Arbor. Michigan guard Jaelin Llewellyn sustained a knee injury in the second half and was helped off the floor. The graduate transfer from Princeton appeared to hurt himself when he planted his left leg and rose for a shot. Howard had no update on Llewellyn after the game.