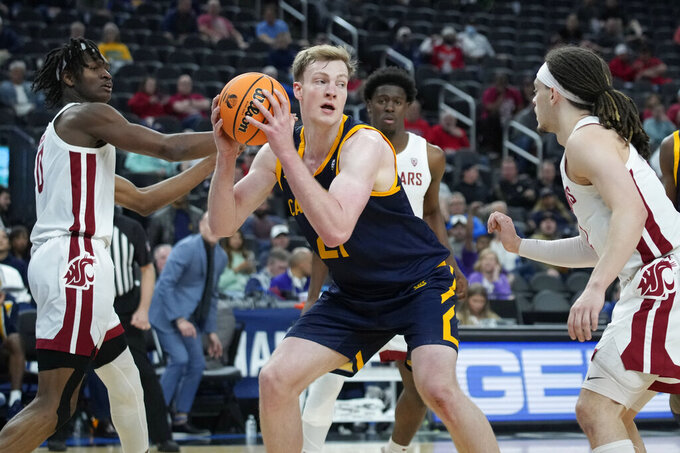 California's Lars Thiemann (21) drives around Washington State during the second half of an NCAA college basketball game in the first round of the Pac-12 tournament Wednesday, March 9, 2022, in Las Vegas. (AP Photo/John Locher)

LAS VEGAS (AP) — Efe Abogidi scored 11 of his 19 points in the first half and No. 7 seed Washington State never trailed in its 66-59 victory over tenth-seeded California in the first round of the Pac-12 Conference tournament on Wednesday night.

Washington State (19-13) will look for its fifth straight win when it faces No. 2 seed UCLA in a Thursday quarterfinal. UCLA beat the Cougars 76-56 about three weeks ago.

Abogidi was 7 of 17 from the field. Tyrell Roberts added 14 points for the Cougars, which also swept the regular-season series against Cal. Michael Flowers and TJ Bamba had 12 points apiece. Dishon Jackson matched a career high with five blocked shots to go with four points.

Jordan Shepherd scored 19 points to lead Cal (12-20), which has lost five of its last six games. Jalen Celestine had 11 points.

Washington State opened the game on a 9-2 surge on its way to a 32-20 halftime advantage. Cal cut the deficit to four early in the second half but didn't get closer.

Washington State is 2-1 with coach Kyle Smith in the conference tournament, winning in 2020 before COVID-19 shut down the tournament and losing last season in the first round. The win in 2020 was WSU’s first in the tournament since 2009.