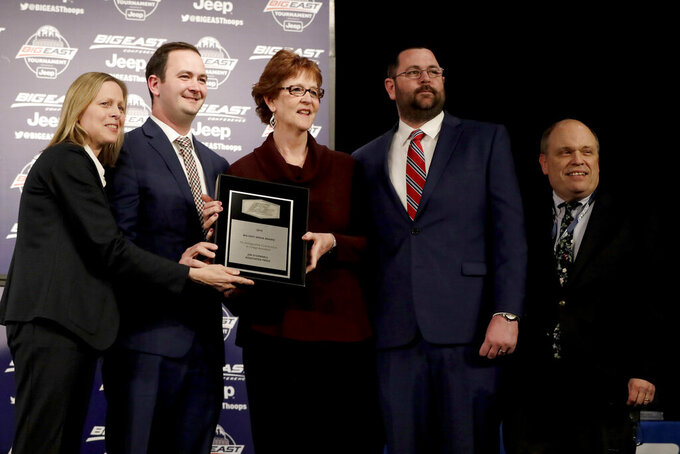 NEW YORK (AP) — The late Jim O'Connell of The Associated Press is the recipient of the Big East Media Award for outstanding contribution to the league and college basketball.

Big East Commissioner Val Ackerman presented the award Wednesday to Anne O'Connell, the Hall of Famer's wife, just hours before the conference kicked off its 37th straight tournament at Madison Square Garden and its 40th overall.

O'Connell, who was The AP's college basketball writer since 1987, covered every one, with the lone exception last year when he was too ill to attend. Oc, as he was known to all, died this past summer. He was 64.

"Oc built very strong and very deep relationships with players, coaches, referees and executives all across the college basketball spectrum," Ackerman said. "His presence, especially here at the Garden for this event ,is deeply missed."

John Paquette, the senior associate commissioner of the conference, was a close friend of O'Connell's and, of course, he had some great stories to share, starting with the writer's traditional meal of a hot dog and soda before games.

Paquette recalled that after covering a game in Providence, O'Connell was driving back home and listening to a radio broadcast of a Louisville-Kentucky game. As his car got closer to New York, the reception started fading.

In true Oc fashion, he exited I-95 in Connecticut, did a U-turn and drove the other way so he could hear the end of the game.

Anne O'Connell laughed about all the stories.

"He was a clown," she said. "He had a really good sense of humor. One of his favorite things was to make us laugh or work the room and make everyone in the room laugh. He was pretty special."

Conference coach of the year Jay Wright of Villanova got to meet O'Connell when he was an assistant with the Wildcats and later when he became the head coach at Hofstra, which was close to O'Connell's home. Their wives played tennis.

Wright and O'Connell talked basketball, recruiting and, when Hofstra got better, the ins and outs of getting into the NIT.

"He was always helpful to me throughout my career," said Wright, whose Wildcats have won two of the last three national titles.

Seton Hall coach Kevin Willard said almost all college coaches knew O'Connell, adding he always got a kick when Oc showed up for an Iona game when Willard was there.

"It was always a running joke that no one covered our games." Willard said, adding Oc (pronounced Ock) was one of the most knowledgeable college basketball writers he ever met.

"It wasn't like he was making stuff up on the fly," Willard said. "He truly lived it and was great at it."

He was such a fixture at college basketball games that TV analysts, other writers, fans, coaches and referees would gravitate toward a man with a long memory, Irish wit and perfect timing.

O'Connell was a president of the United States Basketball Writers Association and entered that organization's Hall of Fame in 2002. The same year, he accepted the Naismith Memorial Hall of Fame's Curt Gowdy Award for his coverage of the sport. He also won the Big East Media award in 1999.