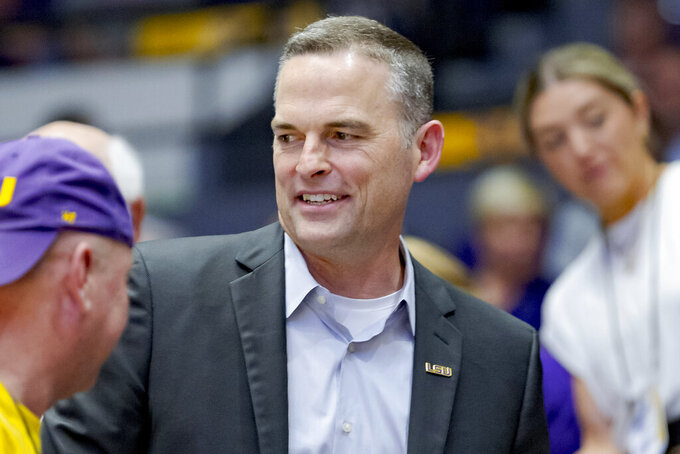 FILE - Former Murray State head coach Matt McMahon, center, talks with LSU fans after being hired as the head men's basketball coach for LSU during the second half of a women's college basketball game against Ohio State in the second round of the NCAA tournament, Monday, March 21, 2022, in Baton Rouge, La. Not long after Matt McMahon was hired to take over a Tigers program which remains under investigation because of NCAA allegations against former coach Will Wade, virtually every player on the roster either graduated, left for the NBA draft, or entered the transfer portal. (AP Photo/Matthew Hinton, File)

Virtually an entirely new team, for that matter.

Not long after Matt McMahon was hired to take over a Tigers program which remains under investigation because of NCAA allegations against former coach Will Wade, every scholarship player on the roster either graduated, left for the NBA draft, or entered the transfer portal.

But McMahon managed to fill all 13 scholarships available in time for this season.

“We have essentially 13 new players,” McMahon said. “We’re trying to take these talented players and build them into one cohesive unit.

Now LSU appears to have a roster with the potential to compete for an NCAA Tournament berth. The question is whether the NCAA will let LSU play in it.

McMahon said he doesn't concern himself with what the NCAA will do as it looks into allegations that Wade offered improper benefits to recruits, albeit prior to rule changes that now allow players to earn money from their name, image or likeness.

Miller was a 2021 transfer from Illinois who was expected to take on a prominent role before a major knee ligament tear that sidelined him all last season.

The guard averaged 8.3 points in his lone season with the Illini in 2020-21. He hasn't played in about 18 months, but recently was cleared to go at full speed.

“His progress has been off the charts,” McMahon said. “We have to temper expectations for him as well because it’s going to be a process.”

McMahon's best known player at Murray State was current NBA star Ja Morant. But he also had the OVC player of the year on last year's roster in Williams and a reliable scorer in Hill. Williams averaged 18 points, 8.4 rebounds and shot 53.8% last season. Hill was first-team all-OVC after averaging 13.4 points and 5.1 assists per game.

McMahon said Reed, who is 6-foot-10, in not "just a back-to-the-basket guy. He's a today’s era forward, skilled on the perimeter, can really pass it, create off the dribble.”

Ward has scoring ability and Philips is a 7-footer who has lost around 70 pounds to get his weight down to around 245, the coach said.

“You see the commitment he’s made to improving," McMahon said. "He’s a guy who can protect the basket.”

The 6-10 Williams headed into the season with a shoulder injury but is expected to be a versatile front-court player who can defend.

The Tigers open the season at home against Kansas City on Nov. 9.

Their nonconference matchups include a game against Wake Forest in Atlanta on Dec. 10 and a home game against preseason No. 25 Texas Tech in the SEC/Big 12 Challenge on Jan. 28.

LSU will begin SEC play at home against No. 10 Arkansas on Dec. 28 before traveling to No. 4 Kentucky on Jan. 3.