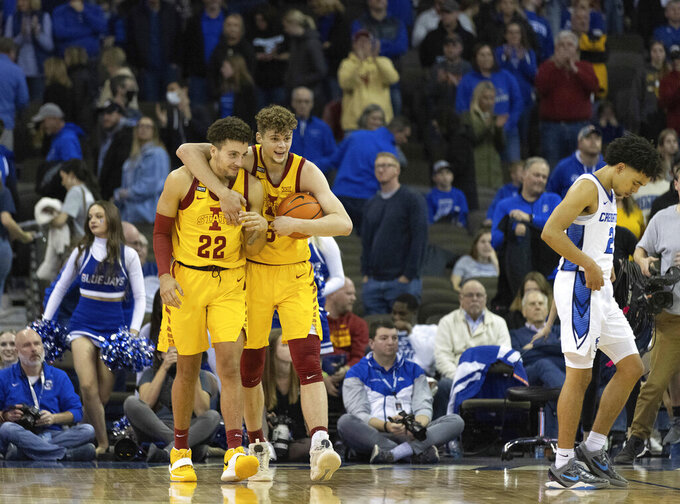 OMAHA, Neb. (AP) — Iowa State put the kibosh on yet another negative streak that was left over from last season's 2-22 campaign.

The No. 19 Cyclones won their first true road game in two seasons on Saturday night, grinding out a 64-58 victory over Creighton in front of a sold-out crowd.

Caleb Grill scored a season-high 16 points, Izaiah Brockington had all 12 of his points in the second half and Iowa State, with new coach T.J. Otzelberger and an overhauled roster, extended its best start since opening 9-0 in the 2015-16 season.

“It was kind of a choppy game and there wasn’t a great flow to it and it was just kind of that way across the board,” Otzelberger said. “That was a gutsy win in a really tough environment.”

The Cyclones already ended losing streaks of 18 in a row overall and 25 against Power Five conference opponents. Now, they have their first win in a true road game since they beat Kansas State in February 2019.

Ryan Hawkins scored a season-high 25 points to lead Creighton and Ryan Nembhard had 10. But the Bluejays (7-2) lost for the first time in 24 nonconference home games after committing 21 turnovers — their most since they had 24 against Nebraska on Nov. 29, 2008.

“I tell the guys that in life you kind of get what you deserve,” Creighton coach Greg McDermott said.

Grill made his first four 3-pointers, including one before the halftime buzzer to tie it at 23 and another early in the second half to give the Cyclones the lead for good.

“Cold-blooded,” Brockington said of Grill's shooting. “Every single one of his shots was big-time because the offense was slow and he was really a bright spot for us. That shot he had going into half really gave us confidence, and we had all the energy in the world coming out in the second half.”

Brockington, ISU's season scoring leader, missed his first nine shots but had seven straight points in the middle of the second half to give the Cyclones a 48-39 lead.

“Coaches kept giving me confidence and the guys kept telling me, ‘Don’t lose confidence and stay aggressive,'” Brockington said. “I just wanted to show up when my team needed it.”

Arthur Kaluma's dunk and free throw pulled the Bluejays within 48-42 and brought the crowd at the CHI Health Center to its feet, but George Conditt's one-handed turnaround shot on the other end snuffed their momentum.

The Bluejays were within six points when Brockington missed a dunk, but Grill snaked through the lane to put it back and put the Cyclones up 54-46.

Creighton was within 61-56 and had the ball with 35 seconds left, but Ryan Nembhard missed a 3.

It was the first meeting between Iowa State and Creighton since 2010. The Cyclones have won seven straight in the series.

Otzelberger also came out on top in the mentor vs. mentee matchup. McDermott, who coached Iowa State from 2006-10, hired Otzelberger as an assistant his first season in Ames. Otzelberger remained with McDermott for his entire four-year run in Ames and returned as coach after two years at UNLV.

“For me personally, I couldn’t have more respect for their program and the job that coach McDermott does every day," Otzelberger said. "I know first-hand in working for him, how much I learned from him and how much of what we do we’ve taken away from him. Not an easy game emotionally to play.”

Iowa State: The Cyclones pride themselves on strong defensive play, and they were at their best against the Bluejays, forcing all those turnovers and limiting them to 42% shooting.

Creighton: This is a young team still learning to play together, but Saturday was good preparation for the physical battles that await when Big East play begins.

Creighton's first basket was a happy accident. Nembhard was trying to deliver a lob for Alex O'Connell to dunk, but the off-target no-arc pass went straight through the hoop for a 3-pointer. The Bluejays' second basket was a deep 3 that Nembhard put up out of desperation as the shot clock was running out.

“As good a coach as coach McDermott is,” Otzelberger said, “my guess is that wasn’t exactly how he drew those two up.”