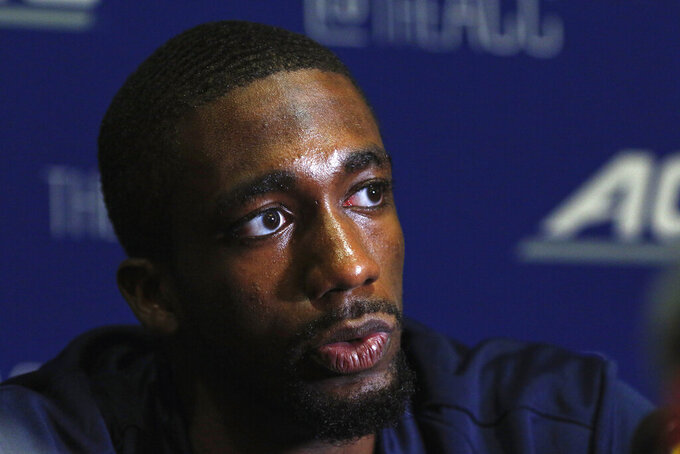 FILE - In this Oct. 8, 2019 file photo North Carolina player Brandon Robinson listens during the Atlantic Coast Conference NCAA college basketball media day in Charlotte, N.C. Any concern about whether it was appropriate to be playing sports in the Bahamas while parts of the multi-island nation continue to recover from the effects of Hurricane Dorian was quickly dispelled by officials. Officials are hoping tourism and upcoming sporting events aid recovery efforts by boosting the economy to pay for reconstruction and raising awareness for people to donate or volunteer for ongoing work. Participants in those events _ including the eight-team Atlantis tournament opening Wednesday, Nov. 27, 2019 are also helping in the recovery. As for UNC’s Robinson, a donation-drive idea came while looking to fulfill a class community-service requirement. Robinson researched groups before settling on the Bahamas Emergency Children’s Hostel with a focus on collecting items such as clothing, diapers, and toiletries from fans during last week’s Elon win. (AP Photo/Nell Redmond, file)

PARADISE ISLAND, Bahamas (AP) — Any concern about whether it was appropriate to be playing sports in the Bahamas while parts of the multi-island nation continue to dig out from devastation following Hurricane Dorian are quickly dismissed by officials.

Bahamians not only want the games, they’re counting on them.

One of those events is the Thanksgiving-week Battle 4 Atlantis men’s college basketball tournament — during which there will be broadcasts of the islands’ famous beaches and not just shots of the wreckage Dorian left behind.

Tourism officials have gone on an “educational tour” that includes easing concerns visitors might have about appearing insensitive by vacationing here.

“Persons have voiced that,” Thompson said. “But we tell them that the best thing you can to help us is we need you to come down and spend the tourism dollars for us to be able to have funds for reconstruction. If you don’t come, you’re going to put us in even worse position.”

“I think us and these teams going down there, they’ll bring light to the situation that the Bahamas still needs help,” Robinson said in a recent interview with The Associated Press.

The Category 5 storm hammered the northern Abaco and Grand Bahama islands in September before giving a glancing blow to the southeastern United States. There were 67 confirmed deaths and 282 people still missing as of late October along with $3.4 billion in losses for the Bahamas, according to a recent report.

Dorian also impacted the tourism industry, which fuels the economy of a country with about 700 islands — some within 100 miles of the Florida coast.

It is estimated tourism represents 50% of the country’s GDP with 6 of 10 jobs tied to tourism in a country of fewer than 400,000 people. Thompson said major tourism areas were “not touched and open for business,” including the Nassau capital and the Paradise Island home to the Atlantis resort hosting the tournament.

Yet Thompson said international arrivals fell 7.4% in September compared to September 2018, the year’s first decline. Declines were sharper for “leading” markets like the U.S. (12.5%) and Canada (15.3%).

That’s where sporting events can help. The Battle 4 Atlantis is one of the premier events on college basketball’s early schedule and Thompson estimates it attracts 8,000 visitors and $3 million in economic impact through lodging, meals, shopping and activities.

“In terms of business,” Thompson said, “it’s extremely lucrative for us.”

Jim Black, 53, of Dakota Dunes, South Dakota said his family stuck with travel plans after researching that the tournament area was fine.

“This is our first time to the Bahamas,” said Black, an Iowa State alumnus sporting a Cyclones cap who traveled with his wife, daughter and daughter’s boyfriend. “So we were kind of looking forward to it back in February when we got the tickets. So when (Dorian) happened, it was a little concerning that there might not be a tournament and we’d have to make other plans.

Other U.S. college events include the four-team men’s Junkanoo Jam (which ended Sunday) and this week’s women’s events: an eight-team Junkanoo tournament in Bimini and the five-team Bahamas Hoopfest in Nassau.

There’s even a college football game: the Bahamas Bowl, played Dec. 20 in the 15,000-seat Thomas A. Robinson National Stadium in Nassau.

Beyond college sports, Tiger Woods hosts the Hero World Challenge (early December) in Albany with a field featuring Dustin Johnson, Justin Thomas, Jordan Spieth and Justin Rose. There are two January events on the PGA Tour’s developmental Korn Ferry Tour there, though the Great Abaco Classic has relocated to Nassau due to Dorian damage.

For many, participating in events inspired ideas to assist the Bahamas or damaged U.S. areas such as North Carolina’s Outer Banks barrier islands.

Conference USA and the Mid-American Conference, which feed teams to the Bahamas Bowl, have announced $25,000 donations for the Bahamas Red Cross along with $25,000 from the Miami-based Orange Bowl.

Alabama held a charity exhibition against Georgia Tech for the American Red Cross in October and visited a Nassau orphanage Monday.

“I definitely think (sports) can help,” first-year coach Nate Oats told the AP. “Our primary goal there is to go win games. But you’re not going to do basketball 24/7. So while you’re there, if you can educate your guys a little bit, help educate the fan base back home about what’s going on in the Bahamas as a whole, it’s smart to do that.”

Robinson — whose effort allowed UNC to deliver more than 1,200 pounds of supplies Sunday to the Bahamas Children’s Emergency Hostel — also believes sports will remind people that recovery efforts are ongoing.

“I think people in the news, they covered this story, and as soon as the storm ended, it was over with,” Robinson said. “You never kind of heard anything about the Bahamas again. ... I think this will be a big thing that can help other people take notice that, ‘OK, we still need to help people further with these situations they go through.’”