New Pac-12 boss Kliavkoff doesn't see expansion as a must 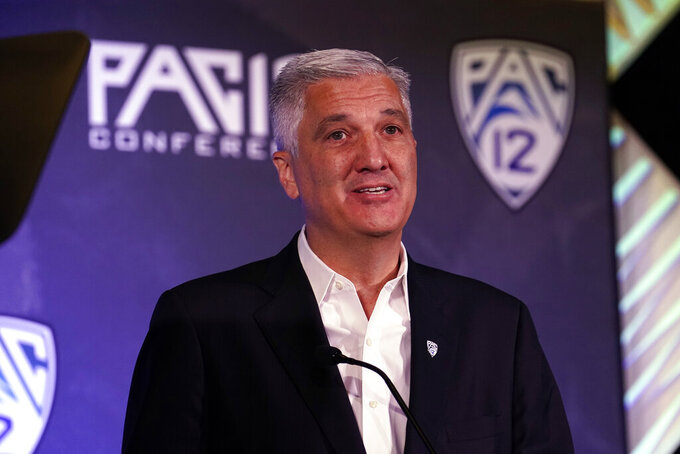 LOS ANGELES (AP) — George Kliavkoff had a lot on his plate in his first couple of months as Pac-12 commissioner — visiting campuses, discussing possible expansion of the College Football Playoff and athletes now being able to profit off their names, images and likenesses. That was only the beginning.

“I was expecting to deal with a couple of large, complex issues related to collegiate athletics in my first couple months,” he said. “I wasn’t expecting to do six or seven of them in the first week, so it’s been interesting.”

Kliavkoff can thank Oklahoma and Texas for adding another huge priority to his list. With both schools petitioning the SEC for membership Tuesday, the latest round of conference realignment looks to be off and running.

If the Pac-12 is going to expand, it will most likely have to look at expanding into the Central Time Zone. Kliavkoff, however, noted expansion doesn't have to be a given, but it will be considered.

“When we’re evaluating whether or not expansion is the right thing for us, we’re thinking about academic, athletic and cultural fits. But we’re also thinking about on the money side, not just making the pie bigger, but make making each slice of the pie bigger. That's a pretty high bar to clear all of those hurdles," Kliavkoff said in an interview with The Associated Press. "We’re in a listening mode, my phone has blown up over the last five days.

“I like that we have this unique position of there being a little bit of chaos in the East. We are solidly the only Power Five conference that has schools in the Mountain and Pacific time zones, which are important for television coverage.”

Another possibility could be creating a stronger alliance with the Big Ten Conference that includes joint scheduling. As Oregon athletic director Rob Mullens noted, all options are on the table and will be explored.

“This is a great league. It’s got a rich tradition for many, many years,” Mullens said. “There’s strong collaboration. We’re all committed to working together to be prepared as the industry evolves.”

The conference media day Tuesday in Los Angeles was Kliavkoff's first chance to meet with media and coaches since being named commissioner in May. Like his predecessor Larry Scott, he comes from outside the world of college athletics. However, he is hoping to avoid the pitfalls Scott encountered over his 11 years as head of the Pac-12.

Scott’s reign included the additions of Colorado and Utah as well as a record-setting, billion-dollar media rights deal. But he also was panned for exorbitant spending at the conference office, decreasing revenues and the Pac-12's failure to be more competitive on a national stage in football and men’s basketball.

While men's basketball appears to be on the rebound after UCLA made the Final Four, football faces more of an uphill climb.

The conference hasn't had a team in the College Football Playoff since Washington in 2016. The Pac-12 ranks at the bottom among the Power Five conferences with just two appearances. The Pac-12 has also not had a national champion in football since Southern California in 2004.

Kliavkoff is no stranger to the Pac-12. He was the president of sports and entertainment for MGM Resorts International in Las Vegas since 2018 and helped negotiate bringing the conference's basketball tournaments and football title game there.

If the Pac-12 is going to be attractive, it must substantially improve nationally in football, which is why Kliavkoff used most of his remarks kicking off media day to discuss how to make that happen.

Colorado coach Karl Dorrell said the heightened expectations for football resonated with him the most.

“I want that expectation from our leader to tell us that this is all about winning championships. Those are the things that I think all of us as coaches, if we have a commissioner that feels that way, too, we need to have that more relevance and significance in the playoff,” he said.