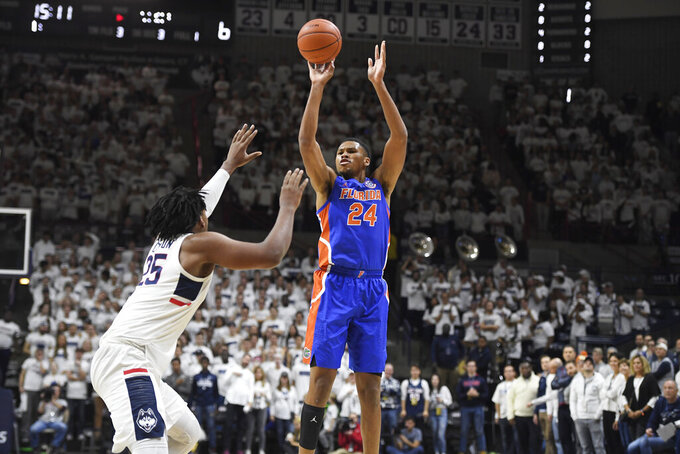 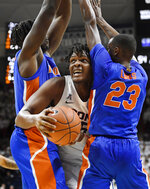 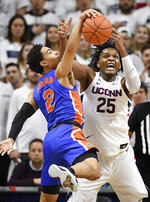 STORRS, Conn. (AP) — Florida coach Mike White says the early part of this season has been a lot of trial and error as his young players try to find some answers on offense.

They did not have many on Sunday.

Christian Vital scored 15 points and made a key steal at the end of the game as UConn upset the No. 15 Gators 62-59.

Tyler Polley also scored 15 points and Josh Carlton added 13 for the Huskies (2-1) who led by five points at halftime and never trailed after intermission.

“Anytime you play on the road, you’re dealing with the stage and 10,000 (fans) screaming at you and you’ve got to step up with poise and confidence and mental toughness and make a shot at this level,” White said. “As a staff we’ve got to do a better job of finding a way to get these guys going, continue to go through that trial-and-error process.”

Keyontae Johnson’s layup with just over a minute to go cut UConn’s lead to 60-59, but those would be the last points the Gators scored.

Florida had a chance to tie after Vital hit two free throws with 17 seconds left. But Alterique Gilbert tipped a pass from Johnson and Vital grabbed it and dribbled away, securing the win.

“A think a year ago, we would have folded, easily,” said Gilbert. “These are the games you come to UConn to play and I think we have a great group of guys now who just want to win.”

Kerry Blackshear Jr. had 15 points and eight rebounds for Florida (2-2), falling two boards shy of a fourth straight double-double. But he fouled out with 4:37 left in the game and his team trailing 53-49. Andrew Nembhard added 14 points, including a 3-pointer that brought the Gators within a point at 54-53.

Blackshear scored the game’s first two baskets, but the Gators made just four of their first 13 attempts from the floor.

UConn also had a tough start, going without a basket for the first six minutes.

Vital got the UConn crowd into the game with a 3-pointer, a dunk and a jumper on consecutive trips down the court that gave the Huskies an 11-6 lead.

Connecticut held Florida to two Blackshear free throws over the final 4:17 of the first half and led 25-20 at halftime.

The loss ends a rough seven days for the Gators. Florida was No. 6 in the Top 25 poll coming into the season but lost to Florida State a week ago and beat Towson by just six points on Thursday. The Gators came into the game averaging just 63.7 points per game, while giving up 60.7.

UConn: This was UConn’s first win against a ranked team at home since February 2016. Highly touted freshman guard James Bouknight has finished serving his three-game suspension following his arrest on charges including evading police in a September car accident. Bouknight, who is due in court on Monday, is expected to suit up for the Huskies in this week’s Charleston Classic, where it’s possible the Huskies could again face either Saint Joseph’s or Florida, depending on how the early rounds pan out.

STATS OF THE GAME

Both offenses struggled from distance. Florida shot 40 percent from the floor but made just five of its 20 shots from 3-point range. UConn was just 4 of 22 from behind the arc.

“We’ve got two, high, high level shooters in Noah Locke and Tre Mann,” White said. “And they shoot it way better than they’ve shot it and I’ve got to figure something out. We’ve got to get them better looks.”

Mann finished with two points, missing both his 3-point attempts. Locke had six points, but was 2 of 8 from the floor, including 2 of 6 from long range.

Mann hit the floor with eight minutes left in the game and lay motionless for some time. White said Mann was knocked unconscious and likely suffered a concussion.

UConn coach Dan Hurley, when asked what the difference was in the locker room when compared to Wednesday, when the Huskies lost by nine points at home to Saint Joseph’s:

“There was water, liquid in both locker rooms,” he said. “On Wednesday, it was tears and today it was Gatorade in cups on my head.”

Florida: The Gators face Saint Joseph’s in the Charleston Classic on Thursday.

UConn: The Huskies also travel to Charleston and face Buffalo in the first round of the tournament on Thursday.