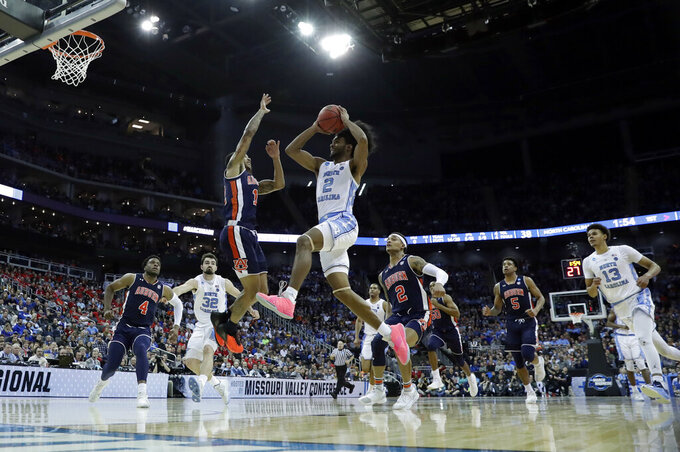 RALEIGH, N.C. (AP) — North Carolina thrived with a seemingly perfect balance of veteran composure and youthful upside to earn a No. 1 seed in the NCAA Tournament.

It wasn't enough to get the Tar Heels back to the Final Four — and they could have a very different look next season depending on the NBA decisions of freshmen Coby White and Nassir Little.

The Tar Heels became the first top seed to fall with Friday's 97-80 loss to Auburn in the Sweet 16. They couldn't stop Auburn's 3-point shooting barrage — 17 of them, the most by a UNC opponent in any NCAA game — and couldn't keep up once the Tigers hit their free-wheeling flow.

And just like that, a 29-win season with losses only to fellow 1-seeds Duke and Virginia since mid-January was over. So too were the careers of seniors Luke Maye and Kenny Williams, along with graduate student Cameron Johnson as every-game starters for a team chasing a third Final Four in four seasons.

"I've loved coaching these guys," UNC coach Roy Williams said, adding: "When I think of Luke Maye and Kenny Williams and Cam ... that's what every coach should love to have."

The focus now turns to whether White and Little leave Chapel Hill, too.

White, who arrived as the state's all-time high school scoring leader, averaged 16.1 points and became the first UNC freshman with three 30-point games. More important, his steady development at the point pushed Roy Williams' run-run-run philosophy to its fastest tempo under the Hall of Fame coach.

The 6-foot-5 White, who had 15 points but went 0 for 7 from 3 against Auburn, has risen in mock drafts as a natural scorer with playmaking potential.

"I don't want to discuss any of that right now," White said after the loss in Kansas City, Missouri. "I just want to be with my team."

Then there's Little, a 6-6 forward widely viewed as a potential one-and-done prospect. He became the Tar Heels' top reserve with aggressiveness and athleticism to attack in transition, get on the glass and hit free throws.

He averaged 9.8 points and 4.6 rebounds, though his development seemingly kept snagging on injuries such as February rolled ankle. And true to form, he had terrific performances in NCAA Tournament wins against Iona and Washington only to come down with flu-like symptoms leading to the Auburn game.

Little didn't look himself, finishing with four points in 13 minutes, with two point-blank looks swatted away.

"I didn't feel my best, but wanted to give it a shot for my team," said Little, who didn't want to discuss his plans. "I wasn't able to produce as much as I wanted to, but I did try."

If both leave, the Tar Heels will lose their top five scorers, as well as their top perimeter defender in Kenny Williams.