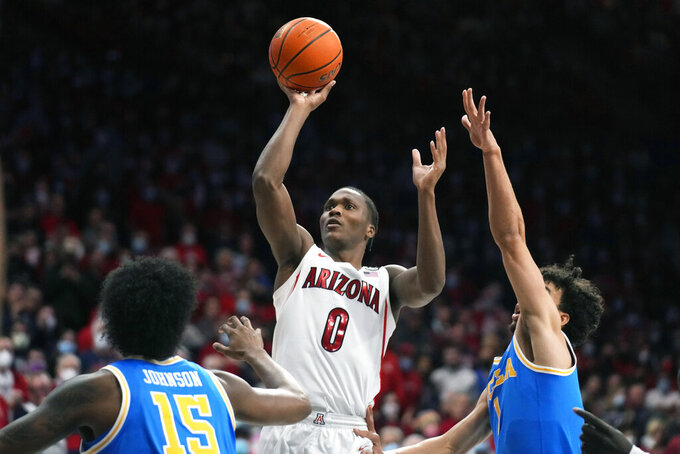 Bennedict Mathurin flashed his athleticism in short bursts as a freshman last season, content to play a supporting role on a team filled with veteran players.

Needed to fill a bigger role as a sophomore, Arizona's bouncy guard proved to be one of the nation's best players.

Mathurin was named The Associated Press Pac-12 player of the year Tuesday by a panel of media who cover the conference after becoming the go-to player on the nation's No. 2 team. Arizona's Tommy Lloyd was named coach of the year after leading the Wildcats to the regular-season title in his first season and Stanford freshman Harrison Ingram was newcomer of the year.

“He’s special," Lloyd said of Mathurin. "He’s a joy to coach and I’m happy that he’s having this success that he is.”

Mathurin averaged 10.8 points and 4.8 rebounds as a freshman last season. The 6-foot-6 guard from Montreal helped carry the Wildcats to their first Pac-12 regular-season title in four years this season, boosting his averages to 17.3 points and 5.8 rebounds.

And it was more than just the numbers. Mathurin became the player the Wildcats turned to when they need a big basket and at least a couple times a game he wows the crowd with thunderous dunks.

“I felt like coming out of the season I had to do it by myself, but it’s about trusting my teammates,” Mathurin said. “Trusting them that they can find me and I’m gonna find them. The goal is to win, so if I get 20 points or I score five points, all I want to do is win.”

Mathurin has helped Lloyd get off to an impressive start in the desert.

Arizona was picked to finish fourth after Lloyd was hired away from Gonzaga, but ended up becoming one of the nation's best teams.

Fast-cutting and free-flowing like the program Lloyd helped build as Mark Few's assistant, the Wildcats quickly moved up the rankings as the wins piled up. Arizona opened the season with 11 straight wins, finished the regular season 28-3 and became the first team in Pac-12 history to win 18 conference games in a season, going 18-2.

“Once we got going it was like, 'Why not?’ I’m not going to try to limit myself or limit this team because we feared success or because maybe it was happening too fast," Lloyd said. “Just let it play out. Let’s manage it on a day-to-day basis and act like we’ve been there before.”

Ingram arrived at Stanford as one of the top recruits in program history. The 6-7 freshman lived up to the hype during a productive freshman season, averaging 10.5 points and 6.6 rebounds while showing off the versatility that could lead him to becoming a first-round NBA draft pick.