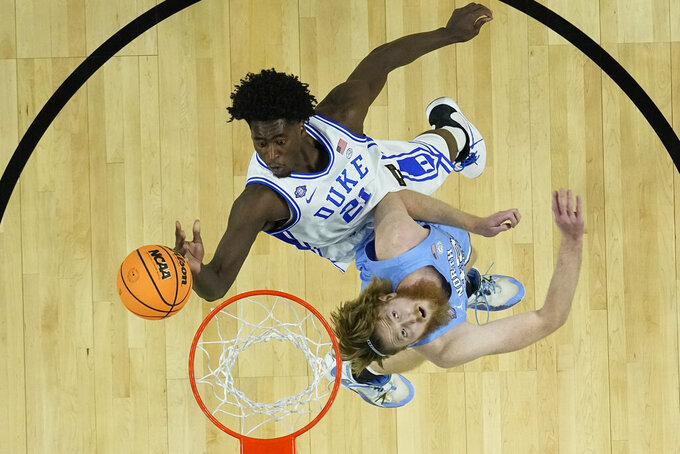 Duke's AJ Griffin (21) shoots over North Carolina's Brady Manek during the first half of a college basketball game in the semifinal round of the Men's Final Four NCAA tournament, Saturday, April 2, 2022, in New Orleans. (AP Photo/David J. Phillip)

Duke freshman A.J. Griffin is heading to the NBA, becoming the fifth Blue Devils player in the past week to declare early for the draft.

The school announced Griffin's decision Sunday, the last day for players to declare themselves eligible for the NBA draft. Duke said the 6-foot-6, 222-pound wing regarded as a potential lottery draft pick plans to hire an agent.

“It was a dream come true,” Griffin said in a statement. "My experiences have helped prepare me for this moment and I am proud to know I will be a Blue Devil for life.”

He averaged 10.4 points while providing size, outside shooting and defensive potential to the wing for the Blue Devils. That production came despite him missing most of his last two high school seasons because of knee and ankle injuries, as well as a preseason knee injury that slowed his process of getting back in rhythm after extended absences.

His role grew as he became more comfortable in returning to full-time action. He moved into the top lineup by mid January and never left, starting Duke's last 25 games. He had 22 points on 8-for-11 shooting in his first start at Wake Forest, the first of five 20-point outputs as a starter — the highlight being a 27-point star-making turn in a win at rival North Carolina in early February.

“A.J. was one of the best shooters in the nation and his skillset is exactly what NBA teams are looking for,” Krzyzewski said in a statement.

While Duke is losing a lot of top-tier talent as Jon Scheyer takes over for Krzyzewski, the Blue Devils will have guard Jeremy Roach — who announced his return earlier in the week and had a strong postseason run — as the team's top returning scorer (8.6 points, 27 starts). Duke also has 247sports' No. 1-ranked recruiting class, featuring top overall prospect Dereck Lively II, fellow big man Kyle Filipowski (No. 3) and small forward Dariq Whitehead (No. 5).