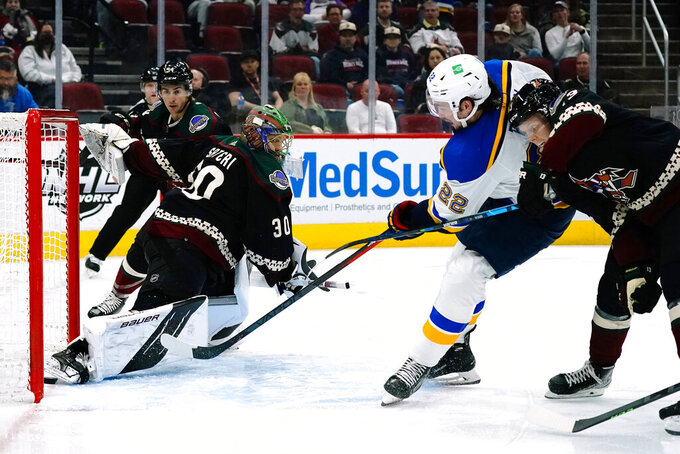 GLENDALE, Ariz. (AP) — The St. Louis Blues had everything clicking, scoring goals and shutting down shooting lanes while building a pair of three-goal leads.

Then they got complacent.

St. Louis still managed to pull out a 5-4 win against one of the NHL's worst teams in overtime, but games like the one Saturday night aren't going to work when the playoffs start.

Justin Faulk scored his second goal 30 seconds into overtime against the Arizona Coyotes to stretch the Blues' franchise-record points streak to 15 games.

“We have to make hard plays, defend well, check, do the right thing with the puck, use your speed — that's it,” Blues coach Craig Berube said.

The Blues locked up the first guaranteed playoff series with a win over San Jose on Thursday, setting up a first-round matchup with Minnesota. Home-ice advantage hasn't been decided yet, so every point counts over the final five regular-season games.

The Blues looked like they were going to roll to their 10th win in 11 games, building leads of 3-0 and 4-1. Instead of pushing forward, they sat back on their heels.

The Coyotes took advantage, clawing their way back early in the third period, 4-3, on goals by Bokondji Imama and Michael Carcone 46 seconds apart.

J.J. Moser tied it with just under five minutes left, but Faulk ended it quickly in overtime, beating Harri Sateri to pull St. Louis into a tie Minnesota for second in the Central Division with 107 points.

Logan Brown, Ivan Barbashev and Brandon Saad scored for St. Louis, which is 13-0-2 its past 15 games. Jordan Binnington had 16 saves while making consecutive starts for the first time since early January.

“Ideally, I wouldn’t have liked it to come to that situation,” Faulk said. “Not too pleased with our third period, to be honest.”

The Coyotes have struggled with injuries their first season under coach Andre Tourigny, yet keep fighting and rebuilding. Arizona played a solid second period after falling into the early three-goal hole and dominated for stretches of the third before coming up just short.

Nate Smith also scored and Sateri stopped 27 shots for the Coyotes, who have lost 10 straight (0-8-2).

The NHL's fourth-highest scoring team didn't take long to rev things up, scoring 3:13 in when Faulk beat Sateri through a screen.

Barbashev scored 2 1/2 minutes later, punching a rebound on a shot by Faulk that trickled through Sateri's pads. Saad made it 3-0 late in the first period, backhanding a loose puck past Sateri on a power play.

Binnington made some tough saves in the first period, including one on Loui Eriksson's breakaway, but had no chance when Smith redirected Anton Stralman's late shot from the slot.

Brown scored on a rebound in the second period, but the Blues went flat after that.

Imama scored his first career NHL goal on a rebound after St. Louis turned it over near the blue line. Carcone made it a one-goal game right after that, one-timing a short pass from Stralman past Binnington.

Moser tied it on a shot Binnington couldn’t see through traffic, but Binnington made some big saves late in regulation to set up Faulk's overtime winner.

“We had a tough time to create offense and we found a way, we found our rhythm and we had more cohesion,” Tourigny said. “Our forecheck was good, a bit more pucks in the net. There’s a lot of positives, there’s a lot to build around that game.”

Coyotes F Andrew Ladd did not play due to a lower-body injury. Arizona recalled F Jan Jenik from Tucson of the AHL to take his roster spot. ... Blues C Brayden Schenn and D Torey Krug did no play due to upper-body injuries. Alexei Toropchenko returned after missing four games with a lower-body injury. ... St. Louis' Robert Thomas (15) and Pacel Buchnevich (12) each had long points streak end.

St. Louis: At Anaheim on Sunday.

Arizona: At Minnesota on Tuesday.