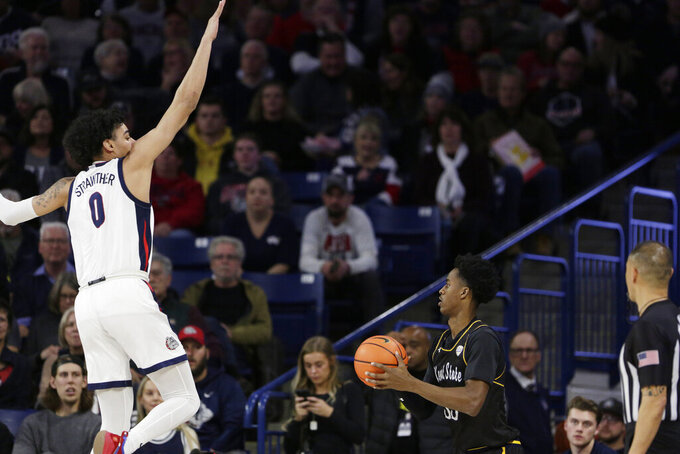 The nation’s longest home win streak was extended to 69 games but not without a major scare by the Golden Flashes. Kent State led 66-62 with 3:38 left after Miryne Thomas’ 3-pointer, but the Bulldogs tightened on the defensive end and got a handful of big plays offensively to hold off the Flashes.

Julian Strawther added 14 points, including a 3-pointer with 3:19 left that started Gonzaga’s decisive run. Timme’s spinning basket in the lane with 2:29 left gave Gonzaga (6-3) the lead, and he added a key defensive play blocking Sincere Carry’s layup attempt at the other end.

Timme was fouled and split free throws with 1:55 left, but Malachi Smith grabbed the offensive rebound and his three-point play gave the Bulldogs a 71-66 lead. It was Smith’s first basket of the game.

“(Timme) was heroic. He wasn’t really looking for the ball much early and wasn’t demanding it … he was splitting the defense and scoring in a variety of ways like he does,” Gonzaga coach Mark Few said. “To end up with 17 boards is monster and we needed every one of them.”

Nolan Hickman added 10 points and seven rebounds for the Bulldogs, who held a 43-30 advantage on the boards. It was just the second home game inside the McCarthey Athletic Center for Gonzaga and first since Nov. 7 against North Florida.

Thomas led Kent State (6-3) with 16 points, including four 3-pointers. Malique Jacobs added 11 points and Carry, who was averaging 18.5 points per game, was held to 10.

“I think in the second half we moved the ball well, we got some turnovers, got some easy shots and was able to give us a lead playing a great team and great program. … Unfortunately we couldn’t finish it off. Give them a lot of credit for that,” Kent State head coach Rob Senderoff said.

Kent State nearly pulled off a surprising upset on the road for the second time in two weeks but couldn’t withstand Gonzaga’s late surge. Kent State led No. 1 Houston by one-point with less than a minute to go nine days ago in Houston but couldn’t make the plays in the closing seconds to finish off the upset in a 49-44 loss.

“Coach Few has told us all week that this is a great team that could go to the Sweet 16. … We knew what they were capable of and we weren’t taking them lightly and we knew it was going to be a dog fight,” Strawther said.

Kelly Olynyk’s No. 13 jersey number was retired in front of a sellout crowd. Olynyk played for Gonzaga from 2009-13 and led the Bulldogs to its first ever No. 1 seed in the NCAA Tournament while earning first team AP All-American status as a senior.

“You’re almost speechless,” Olynyk said. “It’s just such an honor, especially with the names that you’re up beside. They’re unbelievable players.”

Kent State: The Golden Flashes lost their third game of the season and their second against a ranked opponent. Kent State has three non-conference games left before beginning Mid-American Conference play at home against Western Michigan.

Gonzaga: The Bulldogs bounced back from a one-point loss to No. 12 Baylor last week with the win. All three of Gonzaga’s losses are to teams ranked in the top 12 of the AP Top 25.