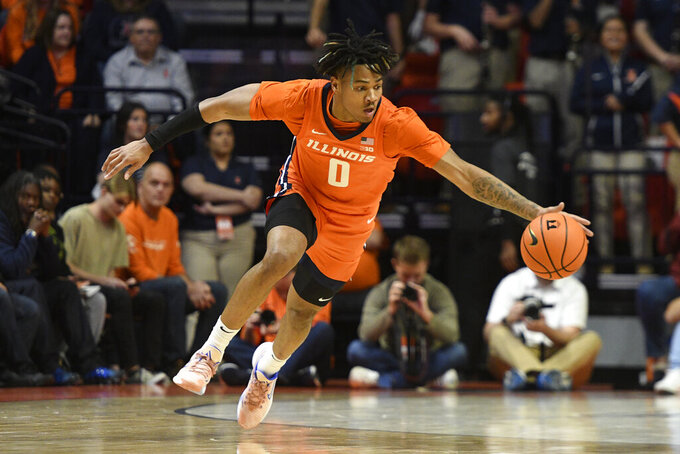 Illinois' Terrence Shannon Jr. reaches for the ball during the first half of an NCAA college basketball game against Monmouth, Monday, Nov. 14, 2022, in Champaign, Ill. (AP Photo/Michael Allio)

CHAMPAIGN, Ill. (AP) — Terrence Shannon Jr. had a career-high 30 points and eight rebounds to lead No. 19 Illinois to a 103-65 win over Monmouth on Monday night.

Freshman guard Jayden Epps scored a season-high 21 points and Dain Dainja finished with 15 points on 7-for-9 shooting for the Illini (3-0).

Illinois made its first five shots — four of them 3s — and hit nine of its first 12 shots to sprint out to a 24-9 lead. It was a sharp contrast from a 1-for-18 start from the field in a win over Kansas City last Friday.

“I feel like we did a better job at the start of this game moving the ball, finding the open man and playing within the flow of the offense,” said Shannon, who shot 8 for 10 from the line.

Epps credited defensive hustle and playing with a “free mind” as keys to settling in smoothly three games into his college career.

“I just had to get a feel of it and then realize that playing defense and paying hard, it just gets you everything," Epps said. “It just opens up everything for you.”

Epps is the seventh Illinois freshman to score at least 20 points in a game since coach Brad Underwood's arrival in 2017.

Illinois led 8-0 just 44 seconds in thanks to a 3 by Shannon, a steal and layup from RJ Melendez and a 3 from Skyy Clark. Clark pushed the Illini lead to double digits with a decisive crossover in transition and a layup, part of a 31-5 run that included four buckets from Shannon and four from Dainja.

“I loved the stretch in the first half between Dain and Skyy and ball screens," Underwood said. "Just an unbelievable segment of execution, of a freshman making the right reads."

Monmouth coach King Rice credited the Illini's ball movement and said having multiple players who can knock down perimeter shots makes them difficult to slow down.

The Illini sharpshooters cooled off a bit in the second half, finishing the game at 59.7%. It hardly mattered in part due to converting 24 Hawks turnovers into 30 points.

Rice said that three road trips to Seton Hall, Virginia and Illinois to open the season was a “little bit too much” for his young squad.

“We’ll bounce back,” Rice said. “We’ve started this bad before and we ended up playing for a championship. This year’s team is a bunch of young boys. Get your licks in now because I’m coming, don’t worry about it.”

Monmouth: King Rice’s group is working through some bumps after graduating seven seniors from last year’s 21-13 team. Back-to-back road games against ranked opponents should serve as good preparation for Monmouth’s first season in the CAA after jumping from the MAAC.

Illinois: Limiting turnovers will be a key for this group in challenging games in Las Vegas, including against No. 8 UCLA.

Monmouth: The Hawks take on Norfolk State in their home opener on Thursday.

Illinois: Heads to Las Vegas to take on No. 8 UCLA on Friday.