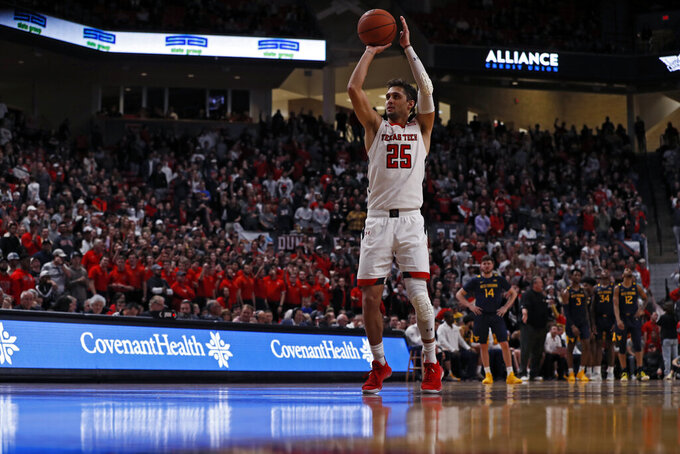 Texas Tech's Davide Moretti (25) shoots a free-throw after a technical foul during the second half of an NCAA college basketball game against West Virginia, Wednesday, Jan. 29, 2020, in Lubbock, Texas. (AP Photo/Brad Tollefson) 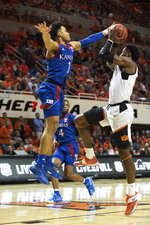 After a break last weekend for SEC-Big 12 contests, the conference dives into the second half of its schedule over the course of the next week with the title still up for grabs. Here's a look at what's coming up:

Texas Tech gained some serious confidence with a tough win over No. 12 West Virginia earlier in the week. Now, coach Chris Beard's crew will try to carry it forward when the Red Raiders visit Allen Fieldhouse on Saturday. The third-ranked Jayhawks have won five straight since losing to top-ranked Baylor at the Phog, including a win over Tennessee last weekend and an easy victory at Oklahoma State earlier this week. Texas Tech (13-7, 4-3) can ill afford too many more losses lest they wind up on the NCAA Tournament bubble, while the Jayhawks (17-3, 6-1) need to keep winning to keep pace with the Bears.

OTHER GAMES TO WATCH

Baylor (18-1, 7-0) has a potential trap game at home against TCU (13-7, 4-3) on Saturday, while the Mountaineers (16-4, 4-3) get a visit from Kansas State. The Bears and Jayhawks both have quick turnarounds with games again on Monday night, with Baylor visiting Kansas State and Texas visiting Kansas.

The SEC-Big 12 Challenge ended in a tie for the second time in seven seasons with each league winning five games. The Big 12 holds a 40-30 advantage in all games. ... Kansas C Udoka Azubuike had back-to-back double-doubles in wins over Kansas State and Tennessee, where the nation's leader in field-goal percentage went 10 of 12 from the field. ... Baylor's 17-game win streak ties the program record set during a 17-0 start to the 2011-12 season. ... The Jayhawks held the Cowboys to 50 points, the fewest they've allowed in a road game since Jan. 12, 2013, against Texas Tech. ... Oklahoma has won 14 of its last 15 at home against Bedlam rival Oklahoma State. The Sooners are 8-1 in the Lloyd Noble Center this season.

Iowa State's Rasir Bolton had 21 points, five assists and a career-high nine rebounds against Oklahoma State last week, then followed with 23 points against Auburn. That was enough to earn him the Big 12's newcomer of the week award. ... Davide Moretti scored a career-high 25 points to lead Texas Tech to its win over the Mountaineers.

The premier matchup of the weekend features second-ranked Baylor (18-1, 7-0) visiting Texas (14-6, 6-2). The Lady Bears get a midweek visit from Kansas. ... Oklahoma State's Vivian Gray averaged 23 points, seven boards and four assists in games against West Virginia and Texas last week. She had 22 points in the Cowgirls' first road win over a ranked team in two years. ... Iowa State's Ashley Joens had her 10th double-double with 21 points and 11 rebounds against Kansas State. ... Kansas State's Ayoka Lee had 23 points and a school record-tying 20 rebounds against Oklahoma, making her the first player in program history with a double-double of 20 or more points and boards. She also blocked five shots.