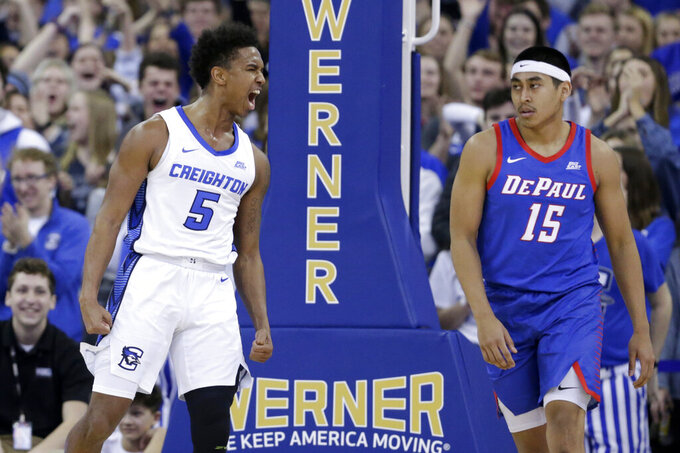 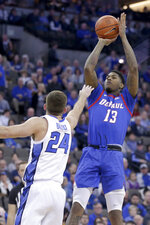 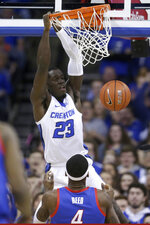 OMAHA, Neb. (AP) — The good times rolled for Creighton at the start of the second half against DePaul.

There was Ty-Shon Alexander feeding Damien Jefferson for a lob dunk. There was Jefferson doing the same for Christian Bishop a minute later, and on the next possession Alexander lobbed to Bishop for another throwdown.

The CHI Health Center crowd of nearly 18,000 and the Bluejays fed off each other during the decisive run, so much so that Mitch Ballock got caught up in the moment and launched a 3-pointer, and missed, right after he crossed center court in transition.

It was all part of the No. 23 Bluejays letting their hair down in a 93-64 rout of DePaul on Saturday night.

“It was exciting,” Alexander said. “Everybody on the team was smiling, everybody was being happy. When we do that, the game is just fun.”

The 18-3 run built Creighton's lead to 60-31, and the bulge grew to as many as 33 points as the Bluejays won for the seventh time in eight games.

“Ty-Shon and I were talking about how that probably was the craziest six- or eight-minute stretch since we've been here at Creighton,” Ballock said. “When you get the crowd into it, you really elevate your game on both ends of the floor.”

Creighton (20-6, 9-4 Big East) won its 12th straight in the series and has beaten DePaul in 15 of 16 meetings since joining the Big East. All but one of those Creighton wins have been by double digits.

The Bluejays are 7-1 in their last eight games and are one game behind first-place Seton Hall in the conference race. They've reached 20 wins for the 20th time in 22 years.

Alexander matched his season high with 24 points in one of his best all-around games. He had eight assists, five steals and a blocked shot as the Bluejays dominated in transition. They finished with seven dunks.

Creighton tied the school record with 18 steals and had season highs with 14 3-pointers and 25 assists on 33 field goals.

“I don't think DePaul had lost a double-figure game on the road all year long,” Creighton coach Greg McDermott said. “Nobody's done this to them. That speaks volumes to the growth of this group of guys. They're really connected on the defensive end, we're really unselfish on the offensive end. That's usually a pretty good recipe for success.”

Charlie Moore had 20 points and five assists and Romeo Weems had 12 points to lead the Blue Demons, who committed 21 turnovers. Paul Reed, who averages better than 15 points and 10 rebounds, was held to season lows of three points and three rebounds.

“Tale of two teams,” DePaul coach Dave Leitao said. “One was playing aggressively, and the other one was not. There wasn't the amount of energy we needed collectively, and as a result, there was no level of offensive or defensive execution.”

DePaul: The struggling Blue Demons couldn't keep up with Creighton and dropped to 0-6 on the road in Big East play after their most lopsided loss of the season.

Creighton: The Bluejays continued their roll, following up their 87-82 road win over No. 10 Seton Hall on Wednesday with their most lopsided conference home win of the season.

The win over Seton Hall and the blowout against DePaul assures the Bluejays of a promotion when the new Top 25 comes out Monday.

Creighton's Shereef Mitchell, who missed the last four games because of injury, returned to score a season-high 11 points. Marcus Zegarowski also had 11... Creighton's Denzel Mahoney missed a free throw for the first time in 22 attempts. ... Ballock went scoreless in 36 minutes against Seton Hall on Wednesday and had his streak of at least one 3-pointer in 23 straight games end. He hit one from the wing early against DePaul, ending an 0-for-9 shooting slump. ... DePaul's Darious Hall made his first 3-pointer of the season, having come into the game 0 for 11 from behind the arc.

DePaul hosts Villanova on Wednesday. The Blue Demons took Nova to overtime in a 79-75 loss Jan. 14.

Creighton visits Marquette on Tuesday. The Bluejays beat Marquette 92-75 in Omaha on Jan. 1.