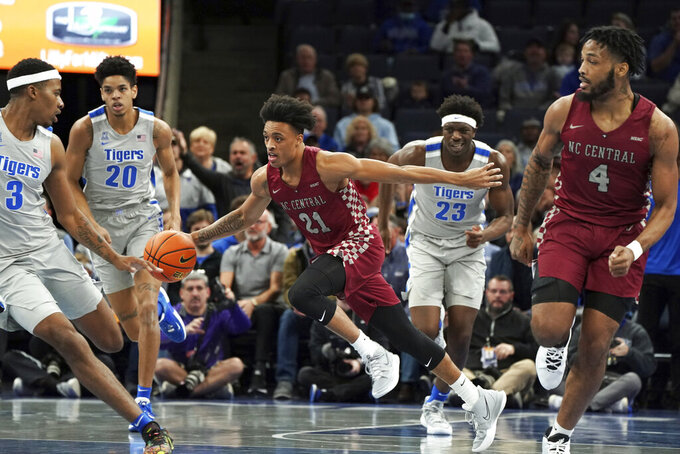 North Carolina Central's Eric Boone (21) drives the ball down the court in the first half of an NCAA college basketball game against Memphis, Saturday, Nov. 13, 2021, in Memphis, Tenn. (AP Photo/Karen Pulfer Focht)

Jalen Duren and Lester Quinones added 10 points each. Duren also had 10 rebounds for the Tigers (2-0), who have won both of their first two games in dominating fashion.

“I think we came out serious from the beginning. We did not relax,” Memphis coach Penny Hardaway said. “... We didn’t take them lightly because we felt like they were a really good opponent.”

“Anytime you have that, it’s a win-win,” Hardaway said of the N.C. Central's shooting percentages both overall and from the perimeter.

Memphis freshman Josh Minott had nine points, nine rebounds and a pair of blocks on Saturday.

“Before I got here, I watched the defense. I think they had the No. 1 defense in efficiency in the country last year,” he said of Memphis. “As I got here, I realized why that was the case. We stress defense so much. It’s just something that every day we are striving to get better.”

Similar to the Tigers’ opening win against Tennessee Tech, Memphis controlled the pace, and its defense pestered the Eagles up and down the court.

“We just wanted to be full throttle from the jump. We know we’re capable of a good press,” Minott said.

Memphis did have a problem with ballhandling in the first half, fumbling away passes and slowing momentum, and part of that was because North Carolina Central went to a zone defense.

Memphis would continue adding into its lead in the second half, with defense creating turnovers. The Tigers outscored North Carolina Central 38-10 to start the second half.

“The only thing was that after shooting 41 free throws, we only made 31,” Hardaway said. “And we gave up 19 offensive rebounds and turned the ball over 19 times with only 13 assists.

“We still have work to do.”

North Carolina Central: The Eagles may have given Richmond some concern Tuesday before the Spiders claimed a 70-60 victory, but they never really threatened Memphis. The Eagles’ zone defense did cause some issues for the Tiger offense in the first half, allowing a Eagle rally before the break, cutting the lead to 38-23.

Memphis: While there was some sloppy play that would have been an issue with a better team, Memphis’ talent overcame the problems.

Memphis’ No. 12 ranking should at least hold into the next poll, and there were not any major losses from the teams in the top 11 slots to result in a major shuffle.

The Tigers had several dunks in the game, but one came as a bit of a surprise — when Hardaway’s son, Jayden, got free and slammed one home in the second half. The dunk drew a wide-eyed reaction from his dad on the sidelines.

Asked after the game, which dunk he thought was the best of the night, Hardaway replied with a laugh: “I don’t want to get in any trouble. I’m going with Jayden’s dunk.”