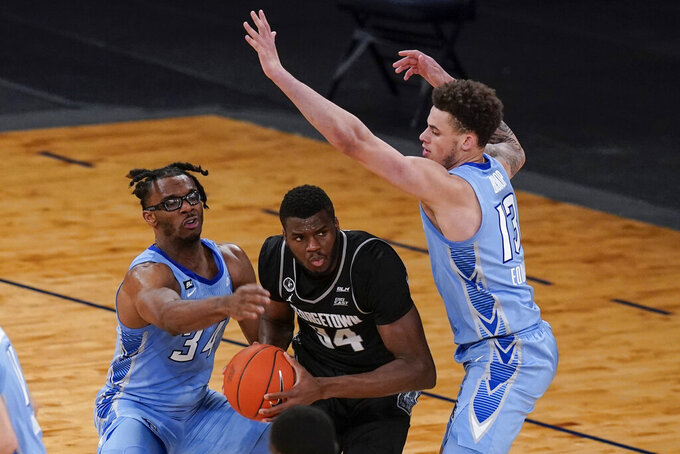 Georgetown's Qudus Wahab (34) protects the ball from Creighton's Denzel Mahoney (34) and Christian Bishop (13) during the second half of an NCAA college basketball game in the championship of the Big East Conference tournament Saturday, March 13, 2021, in New York. (AP Photo/Frank Franklin II)

NEW YORK (AP) — Patrick Ewing climbed the ladder — only a few steps needed for the 7-footer — clipped the last string and held the net high.

Georgetown is the Big East champion again, with the greatest Hoya of them all leading the way.

Ewing is taking his team back to the NCAA Tournament for the first time since 2015 after the eighth-seeded Hoyas completed a surprising run to a Big East crown Saturday night with a stunning 73-48 rout of No. 17 Creighton.

On the 49th anniversary of the day Georgetown hired John Thompson, the late Hall of Fame coach who transformed the program into a national power and one of the most iconic brands in college basketball, the Hoyas won their record eighth Big East Tournament title and first since 2007.

Was it fate? Destiny? Maybe Big John, who died in August at age 78, smiling down on now-Coach Ewing and his Hoyas?

Georgetown won with a dominant performance inside Madison Square Garden, reminiscent of Ewing's playing days at the school.

Ewing called it a huge step for a program that's struggled to recapture old glory, and began this season picked to finish last in the Big East.

"A lot of people discredited. Talked bad about us. We believed in ourselves. We worked hard. We fought hard,” he said.

Ewing wondered aloud earlier this week if they had forgotten him at MSG. He complained that security asked to see his credentials as he was moving around the building where he starred for the New York Knicks and his No. 33 jersey hangs from the rafters.

Ewing said this championship was “right up there” with his greatest moments at The Garden.

“Different chapter of my life,” he said.

Bile matched a season high with 19 points and Jahvon Blair had 18 for Georgetown. After missing 12 of their first 14 shots, the Hoyas finished shooting 46.6% from the floor.

Marcus Zegarowski scored 17 points to lead Creighton, which is 0-3 in Big East title games since joining the conference for the 2013-14 season.

Georgetown fans, the few dozen that were in the mostly empty building because of COVID-19 restrictions, chanted “This Is, Our House!” as the Hoyas prepared to accept the championship trophy. Ewing carried a T-shirt with Thompson's image on it, his old coach's fist raised high.

“Just to see how happy he is, it makes me happy,” Blair said about Ewing. “I'm just so happy for him.”

Ewing and Thompson combined for three Big East Tournament championships, three Final Four appearances and a national title in 1984 during their time together at Georgetown.

Ewing aspired to be a head coach like his mentor. He spent 15 years as an assistant in the NBA, never getting a shot to be head coach — until his alma mater came calling.

“I’m here where a lot of people didn’t think I had the ability to (be),” Ewing said. “And I’m proving everyone wrong."

The 58-year-old Ewing is in his fourth season with the Hoyas, and up until this week there hasn’t been much to get excited about. The only postseason tournament appearance was a one-game stay in the 2019 NIT. At the start of this tournament, Ewing's record was 58-58 as head coach.

Georgetown: Became the first No. 8 seed to win the Big East Tournament and the lowest seed since Connecticut did it as a No. 9 in 2011. Georgetown's eighth title broke a tie with UConn for the most of any school.

Those 2011 Huskies went on to win a national title. That seems unlikely for these Hoyas, who entered the Big East Tournament with a losing record. But Georgetown is 10-4 since returning from a COVID-19 pause in mid-January, a run that coincided with Ewing inserting Bile into the starting lineup.

“Once you get to the NCAA Tournament anything is possible,” Ewing said.

Creighton: The Bluejays scored a season-low 48 points and shot 29% from the field.

“We've got a mature group and I think they understand this hasn't happened to us very often over the course of the last couple years,” coach Greg McDermott said. “Once in a while it happens, but you hope it doesn't happen on a night like tonight.”

Freshman point guard Dante Harris scored 10 points, with eight rebounds and five assists, to cap a strong week that earned him MVP of the tournament.

Blair and teammate Qudus Wahab also made the all-tournament team along with Zegarowski, Adama Sanogo of Connecticut and Jared Rhoden of Seton Hall.

The Hoyas likely give the Big East four teams in the NCAA Tournament along with Creighton, Villanova and UConn.